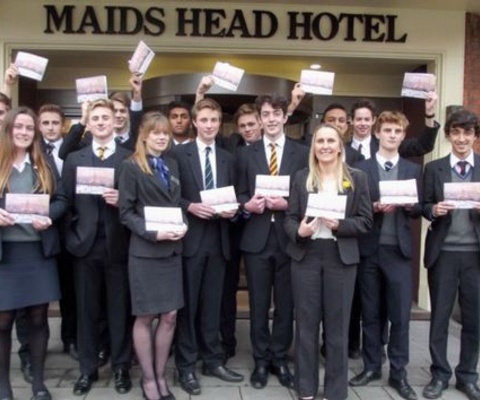 Managing Director Tom Osborn (L6B) writes about his Young Enterprise experiences with Norwich School group Inceptum. The team were by far the most financially successful business at the Norfolk finals, winning the Aviva trophy for Enterprise and another for Customer Focus:

During the Michaelmas term the L6 was approached to sign up to take part in this year's Young Enterprise competition. After writing a letter of application, 17 of the successful applicants were placed into our group. At first we struggled to come up with a product which hadn't already been created and was possible for a group of Sixth Formers to develop. Eventually we created the Norwich Colouring Guide, a unique product which combines colourable images, facts about Norwich's landmarks and a map. The main problems at this stage were producing the book to a high standard, something which took a long time as some of the images needed to be hand-traced, and getting the books printed in time for Christmas. Unfortunately we were unable to have the books printed by the time of our first trade fair and so had to create a mock-up version to try and attract pre-orders. The sales process was successful to a level beyond our wildest expectations. We took 25 pre-orders in two days and sold out of our first batch of 200 in a matter of weeks in the run up to Christmas. Shortly after we sold out the first time, we received a large order of 100 books from the Maids Head Hotel who wished to include the books in their Historic Norwich package and sell them. This order meant we had to have a second print run and, since the Christmas market was over, look for new ways to attract attention to our product. With the help of the Maids Head we ran an article in the EDP and Evening News and on both their website and the school's, resulting in more sales as people read these articles and went to Jarrolds, where we had 30 books on sale, and the Maids Head to buy a copy. Recently we sold out of the book for a second time and have now sold 521 out of 530 copies with books now in seven countries around the world including the USA, Canada and China.

Part of the Young Enterprise programme is a competition against other Norfolk companies with the possibility of reaching the regional and national finals. For this we had to prepare a presentation and company report to highlight our achievements, product and solution for problems we encountered along the way. This was a daunting exercise and the first time some of us had spoken in front of a large audience but in the Norfolk semi-final we were one of the six groups to progress to the final. The final took place at the UEA and we had the added pressure of interviews with judges and running a trade stand. Despite not progressing to the regional finals in Cambridge, everyone who attended, whilst obviously disappointed, enjoyed and learned from the experience and we were delighted to come away with two awards.

The experience was very rewarding for us all and we have all learned more about running a business, communicating effectively both within our team and with suppliers and customers, and have become more confident.

We would all like to thank Young Enterprise and Mr White for giving us this opportunity and Irina Vakh from HSBC, our business advisor, and Mrs Hood for their help and support.