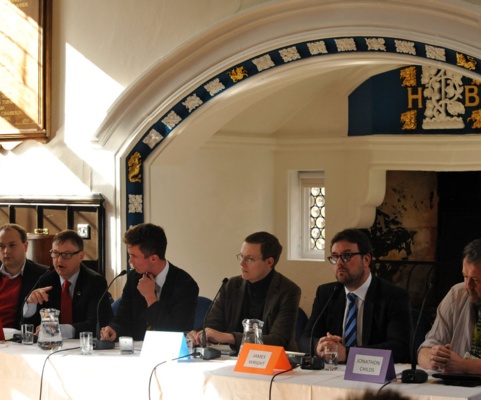 Will Tremelling (L6C) writes for the blog about his experiences organising, and hosting, the first Norwich School Debating Society Question Time which was held last week at the Great Hospital:

Having been a keen member of Norwich School Debating Society since Lower 4 and in my Lower Sixth year becoming the President of the Debating Society, I wanted to arrange an event that could include pupils who although interested in politics had not necessarily been involved with the Debating Society. The idea was born from my keen interest in politics, spending time last summer working in a local MPs office and enjoying watching the 'BBC Question Time'.

I approached Mr Bateman and Dr Cornell who were very encouraging and gave the go ahead for me to approach local politicians to take part in the first ever Norwich School Question Time Debate. Little did I know when first planning this that Theresa May would give us a 'snap general election.' The timing could not have been more perfect.

In my quest to find speakers from all the political parties and knowing that the success of the event relied on this, I approached the City Council and other local contacts I'd made over the last year or so. It was a process of emailing, phoning and even turning up at MP's offices. Had I known who we would have at the outset in the final line up, I would not have had the sleepless nights worrying when various speakers became unavailable. With the local elections already in the calendar I was finding that it was a busy time for them all. Our speakers now confirmed as Martin Schmierer (Green Party), James Wright (Lib Dem), Andrew Wiltshire (Conservative), Jonathon Child (UKIP) and Mike Stonard (Labour), we needed to make sure we had a good audience and some interesting questions. The Vice President of the Debating Society, Gillean Brook, and I arranged a school assembly to introduce the idea to our fellow pupils and encourage them to submit questions. Following this there was huge support for the event with pupils and even some parents begging for tickets! We wanted to include local schools so Notre Dame School and CNS were approached to see if they would have some politics students who were keen and the response was very positive with all available spaces filled.

Our venue was Birkbeck Hall, Great Hospital, Bishopgate which is a wonderful space and the staff there were so helpful and accommodating with over 100 pupils and staff from Norwich School, CNS and Notre Dame School attending.

Having studied the BBC Question Time format and timed how long they allowed for each question and realizing how very talented the veteran broadcaster David Dimbleby is, there was a certain amount of pressure.

The calibre of questions submitted was fantastic and it made it difficult to choose which would be asked. We wanted to have a good balance of local and of countrywide issues and with the looming election there was plenty to cover.

The afternoon kicked off with a question from George Clements on whether the panel thought the snap General Election was a fair move and what the consequences would be, followed by Joanne Reed on what could be done to encourage young people to have a positive attitude to politics and prevent apathy. Benjy Fischer asked how Norwich's economy will be affected by Brexit. Benjy Stimpson asked about what the parties would do to protect the earth and Calum Watkin's question was about the reaction to Theresa May not taking part in a televised debate.

Our politicians were incredibly knowledgeable and engaged with each other and with the audience. It was a lively but well-tempered debate, really highlighting the differences between the parties, and I'm sure will shape our views in the future. Gill Brook did a fantastic job getting round the audience with the microphone and encouraging them to ask follow up questions.

I am incredibly grateful to a number of other sixth formers who were so helpful at the event, helping to welcome the guest speakers and with the general organization. An enormous thank you goes to Mr Bateman and Dr Cornell who were incredibly supportive and helped to make the event run so smoothly.

The feedback was great, with the audience and our speakers thoroughly enjoying the event. The politicians welcomed the opportunity to voice their views, especially before the local council elections and of course the forthcoming General Election.