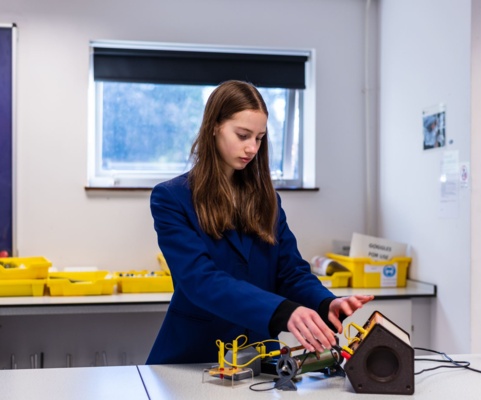 Here at Norwich School, we are proud to be a part of the Youth STEMM Awards. We caught up with Isabella Kirby (M5) who tells us about what she is working on for her award...

"Independent research into a STEMM topic (Science, Technology, Engineering, Mathematics and Medicine) is a means of achieving hours for a Youth STEMM Award. As part requirement for my bronze level award, I am researching why objects are different colours. In this summary I will briefly explain how objects react to light and how this determines their outward appearance.

When you look at an opaque object it makes sense that it doesn’t reflect all incoming light- else it would act as a mirror. So what happens to light that is not reflected?

The atoms that form all objects contain electrons that surround the nucleus (the centre of an atom). Electrons further from the nucleus are higher in energy as they are attracted to the nucleus and therefore work must be done to separate them. These electrons occupy energy levels (or shells) that are positioned uniquely for different materials. It is important to note that electrons can’t exist between these shells (imagine them as discrete steps in a stairway) but they can move up into higher energy levels when supplied with the right amount of energy. Specifically, when incoming light is the same frequency (or near to) the energy difference between shells, the light is absorbed and electrons become temporarily ‘excited’ – they are promoted into a higher shell.

To describe why an object has colour, and to help visualise the concept, scientists often refer to light as being made up of photons. Photons can be imagined as tiny balls or packets of energy. Photons with different energies have different frequencies and therefore different colours. When these photons hit an object, the object will absorb the photons that match the amount of energy needed to ‘excite’ its electrons. All other photons pass through and are observed as the leftover colour we see. Having understood this, It is possible to explain why objects such as glass are transparent. The atoms in glass have large energy differences between their energy levels, and as the photons we can see do not carry enough energy to excite the electrons in the glass, they will all instead just pass through making the glass see-through.

After an electron is excited, it will eventually ‘relax’ to its original energy level. As electrons gain the energy of any photon they absorb when excited, they will also lose energy when they return to their ‘ground state’. This energy is lost in the form of a re-emitted photon, but these photons might not necessarily be the same frequency as the ones needed to originally excite the electrons, as they can lose energy by vibration while in an excited state. The emission of light from a substance that has previously absorbed energy of a higher frequency is known as fluorescence. Fluorescence is the process observed when bank notes emit visible coloured light when placed under an ultraviolet lamp – ultraviolet light being higher in energy than the frequencies that our eyes can perceive.

There are many other reasons why objects may show different colours, such as by heating or through reaction with external substances, however they typically follow similar mechanisms. I look forward to reporting more on these and other topics as I continue with my involvement in the Youth STEMM Award."