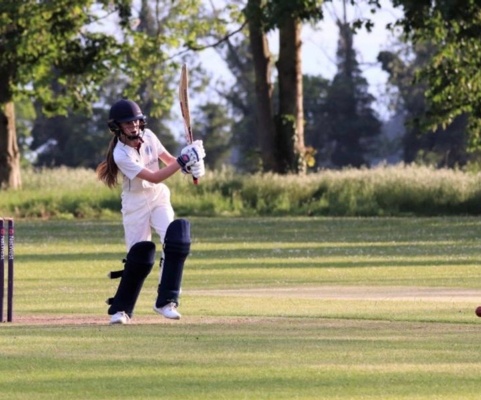 India-Rose (L5): An Introduction to my Cricket Journey

India-Rose Fox (L5) is a keen cricket player, currently part of the Norfolk Cricket Board Centre of Excellence programme, and has twice captained her girls cricket team. In this blog, she tells us about her journey and encourages people to 'have a go!'

"Cricket matches quickly became the absolute norm for me since literally a baby in a pram, being pushed around the boundary of so many grounds and counties over so many summer months growing up.

My brothers both played for school, club and county, so I soon became accustomed to ‘that’s what we did every weekend’. A plastic bat and stumps were never far from my side, for many hours of practicing bowling and batting if my other siblings were around to play.

I joined Swardeston Cricket Club youth training at the age of five and from there progressed into U9, U10 and U11 boys teams (often being the only girl, as there wasn’t a team then for girls).

Then my club put me forward for Norfolk County Cricket trials, aiming for the U11 girls squad. I was successful and got in! I was so happy to make it and then bowled over to be selected as the county captain for that age group, what an honour!

An amazing first year was had by my whole team, loads of fun, playing and travelling to other counties, seeing many beautiful grounds all between months of May and August, playing each team twice (usually with one home match and one away). My summers have always been busy!

Cricket to me is a thoroughly enjoyable game. I am both a batter and a bowler and have learned to captain my team, which over time has become very rewarding. Taking wickets and getting lots of runs is always exciting, but cricket can be tough too, and lessons always to be learnt.

Again last year I was in the U13 girls Norfolk Cricket squad and over the moon to be named captain for the second time. It was a bit of a different season due to the pandemic, but we did manage some games and luckily our tour went ahead.

Towards the end of cricket season, we very much look forward to a carefully organised tour. We are away for around four days usually and I have been lucky enough to have visited twice now the beautiful Malvern College in Worcestershire, where we all stay in the boarding houses and have a fun-packed time, obviously playing cricket vs other counties, but also squeezing in other activities too. Our time away is incredibly fun with all the team and really helps finish the season off.

Norwich School have also always been very supportive with my love of the game, allowing me to participate within the boys teams from a young age at the Lower School and in particular including me in a tour to Hurstpierpoint College. With our U11 boys team, I recall great memories of that beautiful school.

As with all sports, there are always plenty of goals to achieve and much to aim for, and for me, having also been in the Centre of Excellence with my cricket for two years running, I am now trying very hard to achieve the Emerging Players Programme for 14-18 year olds. This again offers even more intense fitness and techniques to help with my game, so very much hoping I can achieve this next.

Anyone can play cricket: a little patience, a lot of perseverance and plenty of practising – please go try it! Fab, fun and lots of fresh air."