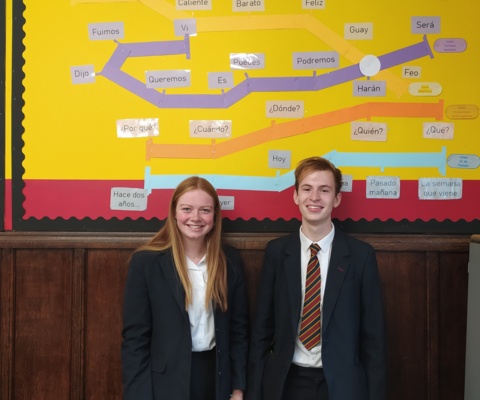 The competition runs across 4 levels in 5 languages, covering all year groups at secondary school from age 11 to 18, with over 3,200 entries to the competition. Across the six strands of the competition running this year, judges selected 24 national winners, 20 national runners-up, 182 area winners and 216 commended entries.

Alex shared with us his experience of entering the competition:

"I recently had the opportunity to develop my language skills by taking part in the Anthea Bell Prize, a translation competition run by Oxford University and judged by a panel of literary translators and writers and which attracted over a thousand entries. There was a mix of fiction and non-fiction passages, all taken from authentic texts and all rich in cultural content, and translations were rewarded both for accuracy and creativity.

I gained an appreciation of the incredible concentration of skills and nuance required to produce a good translation and the challenge of capturing the essence and genre of the original while trying to achieve both accuracy of translation and cultural equivalence. It was a challenge which I enjoyed hugely and which gave me a new appreciation for the work of translators, whose meticulous work is something we often take for granted.

I was surprised to win the regional French prize for my translation of an excerpt from a novel, particularly as I haven’t studied French since year 9! Lily was thrilled to win for Spanish."

Well done to Alex and Lily!

07.07.22 Macy-Jane Hewitt and Izzy Kirby highly commended for their entries in the Young Norfolk Writing Competition
Academic Arts
04.07.22 We Learn from Isabella Kirby About the Life Cycle Of The Stars as Part of Her Work Towards a Youth STEMM Award
Academic
20.05.22 Norwich School at the Wycombe Model Arctic Council and Model United Nations
Academic Clubs and Societies