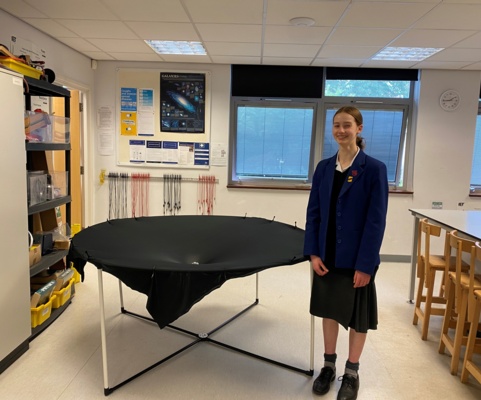 Here at Norwich School, we are proud to be a part of the Youth STEMM Awards and as part of her work for the award, Isabella Kirby (M5) has done a blog investigating the life cycle of the stars - including how some turn into black holes.

"At the start of a star’s ‘life’ they are just a cloud of dust and gas (mostly hydrogen) in space. Gravity will start to pull this cloud together making it more dense. The denser it gets the larger the force of gravity it will exert, which attracts more particles to it. To visualise this, you can imagine a bowling ball placed on a trampoline, or tightly stretched linen sheet – the ball will immediately roll towards the centre. If smaller balls like marbles are added to the surface of the sheet, they will be ‘pulled’ towards the bigger mass in the centre that is warping the sheet downwards. Physicists think of the sheet as something called ‘space-time’ that surrounds all objects in the universe. The bigger the mass of the central object, the larger its warping effect, and the more it distorts space-time – more on this later.

This continuous contraction of dust and gas eventually leads to the formation of a ‘protostar’ within the cloud. Even at this stage, gravity will continue to increase meaning the temperature and pressure within the protostar rises further. If the temperature and pressure is great enough, the process of ‘nuclear fusion’ will begin. In a star, this is where hydrogen nuclei are forced together so that they combine to make a heavier element (helium). This releases a lot of energy that subsequently pushes the material within the star outwards. This outward force opposes the force of gravity – which continues to pull mass inwards. When the outward and inward forces are balanced, the star becomes stable and enters the next stage of its life cycle: becoming a ‘main sequence star’ – this is the stage our sun is currently in and is likely to remain for another 6 billion years.

When small/medium stars (like our sun) eventually run out of hydrogen, the inward force of gravity will overcome the outward force. This causes the core of the star to contract and the outer layers to expand and subsequently cool. The star then becomes a red giant that will eventually expel its outer layers altogether, leaving behind a ‘small’ but incredibly hot core (a white dwarf) which will further cool to become a black dwarf that emits no energy. Other more massive stars, when they run out of hydrogen, will instead expand into a ‘red supergiant, before exploding as a ‘super nova’. Very large stars will then condense down to form ‘neutron stars’, but the largest known stars will instead contract until they become a ‘black hole’. At this point, the core of the star (the ‘singularity’) will have a mass at least 3-4 times that of our own sun squashed down into a circle about the diameter of New York City. For this reason, physicists theorise that the singularity is a place where the force of gravity is ‘infinitely’ strong.

Many theories exist about the properties of black holes. Perhaps the most interesting relate to how they impact their local space-time. Space-time is a theoretical model consisting of the three dimensions of space (i.e., width, height, and depth) and a fourth dimension of time. Knowing that space-time can be warped by objects with mass, it is worth considering how these masses specifically impact our perception of time. For example, time moves slower for objects closer to the earth, relative to objects further away. On Earth this time variation is so small that we can only detect it with the most precise clocks, but the extreme mass of a black hole is believed to warp space-time so much that it causes time to be warped to a greater degree.

What follows is a theoretical interpretation of how time dilation near a black hole may be perceived, accepting that there is still much that we are yet to learn about them. Imagine a person outside a black hole viewing an object heading towards it. It is possible that the object will reach a position located just before something called the ‘event horizon’ where time is so dilated by the black hole that it essentially no longer flows. The event horizon is an imaginary boundry where gravity is so strong that not even light can escape. Here, the person will see the object appear to be ‘frozen’ in space-time. This means from the person’s perspective, the object would be eternally pulled towards the singularity of the black hole. Physicists have suggested that at this point, the black hole is no longer pulling the object towards a place, but instead is pulling the object infinitely through time towards the future. This then means to escape a black hole you would either have to travel backwards through time or towards the present- both of which (as far as we know) are impossible!"