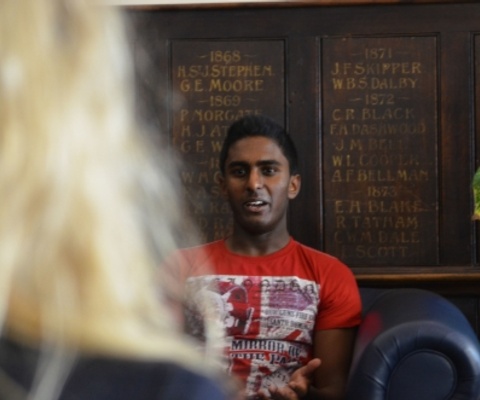 Recent leaver and ON, Lasith Ranasinghe has been nominated for the prestigious Bernard Matthews Youth Award. Set up to identify and reward the success and achievements of young people aged between 11-18 years living in Norfolk and Suffolk, Lasith's nomination recognises his work for both his community service as a pupil of Norwich School and his work for charity 'Smile'. U6 pupil Olivia Williams chatted to him about his achievements...

In Sri Lanka, 42% of the population lives on under $2 a day with 90% of the poor living in rural areas of the country. A lack of social and economic infrastructure, which includes educational services, is judged the cause of this deprivation. Lasith was born in Sri Lanka and lived there up until the age of six and still maintains close family ties in the country.

It was following a visit to the country, during which the devastating tsunami in 2004 stuck, that  Lasith decided to create the charity 'Smile' to tackle the destitution in rural Sri Lanka. The World Bank has confirmed that climate-related hazards are intrinsically linked to the prosperity of Sri Lanka and pose a significant threat to the social and economic development of the country; and with 31% of Sri Lankans earning a living through agriculture, almost entirely rurally based, this makes nearly a third of Sri Lankans vulnerable to poverty.

After encountering natural disaster first hand, Lasith set up his charity 'Smile' in 2010. He raised his first funds for the project by asking his family to donate money to 'Smile' rather than giving him birthday presents, which were used to fund educational projects in Sri Lanka. At first donations were used to supply an orphanage in Colombo with invaluable necessities such as mattresses and books, but it was soon apparent that greater help was needed in the more rural areas. With newfound determination Lasith campaigned relentlessly via cake sales, non-school uniform days, via the charity Peace Jam and the opportunity to be the guest speaker at Nelson's Spirit's annual Trafalgar Dinner.

This year Lasith travelled to Sri Lanka with £1500, nearly twice the funds he raised in the last two years, to spend on the needs of Sri Lankan children. After venturing into rural Sri Lanka, he decided to supply a provincial school with basic equipment (computers, a piano, books). Lasith comments that when he first set up the computers for the school he invited two of the students to test the IT equipment. The computers, so alien to the girls, were objects that induced fear; a concept which seems inconceivable to western society and really shows just how isolated rural Sri Lanka really is. The students of the school were so grateful for this aid they held a talent show for Lasith and his family, which he describes was 'touching yet emotionally overwhelming'.

Alongside his commitment to Smile, Lasith also participated in the school's community service programme, travelling to Corton House care home every week to support the residents there. He made it his priority to seek out new residents and simply chat to them, and coincidentally learned about British naval battle tactics in Sri Lanka over 50 years ago, from resident who served there. Lasith said "the residents often said that just listening to them provided them with a feeling of self-worth one shouldn't lose in old age. It was a privilege to gain a perspective of their lives once a week."

Due to Lasith's unstoppable compassion and dedication he has since been nominated for a Bernard Matthews Youth Award, which commemorates the charitable efforts of people in the local community. The prize, £1000 to your chosen cause, will hopefully enable Lasith to expand further into the rural territory, especially into the northern region which was catastrophically upheaved by the civil war.