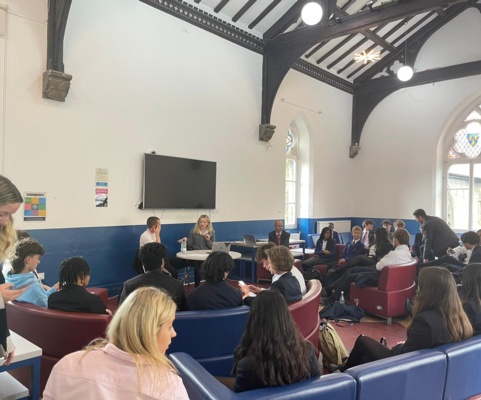 On the 5th of May, Norwich School welcomed Ex Citibank Trader and Inequality Economist Gary Stevenson to The Gartley Society.

Gary Stevenson is an inequality economist and a former trader who works on predicting economic disasters and why these can be avoided by the shrinking of the wealth gap. Gary has a degree from LSE and has gone on to study at Oxford for his master’s in economics. He worked for Citibank in London and Tokyo from 2008- 2014 and quickly became the bank’s most profitable trader globally by correctly predicting the after effects (specifically on interest rates) of the 2008 financial crisis. His prediction was that the financial crisis would lead to long term stagnation in interest rates and a rapid rise in asset values; he decided to bet against the UK economy and was right. In 2014, Gary retired at the age of 27 years old - a multi-millionaire. He now focuses on spreading what he knows about wealth inequality. He has starred in many BBC documentaries alongside producing his own work on YouTube and writing articles.

Gary was invited to talk at the School where he shared his provoking views on inequality in Britain and his solutions to this dire problem. Gary also briefly mentioned how he made a fortune from betting against rising inflation rates and his views on how government policies should be influenced in the future (more details can be found on https://www.youtube.com/c/GarysEconomics).

During his visit, L6 pupil Octavia Udy interviewed him and pupils who attended learnt about the large wealth gap which has been furthered by the pandemic.

Octavia reported that pupils were fascinated by the way Gary made his career through his prediction, which has subsequently inspired many to look into a career in trading.