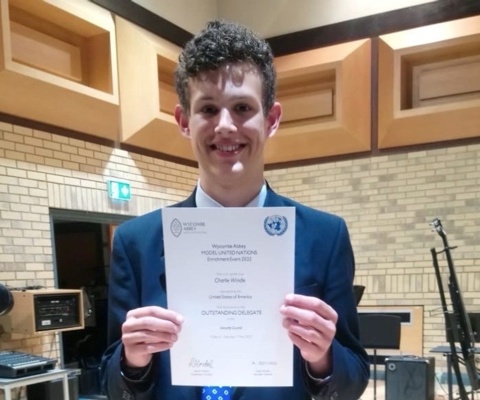 Four of the five pupils took part in WYCOMAC, with three of them playing the unique role of diplomats representing the Indigenous peoples of the region - Bibi representing the Aleut International Association, Amy the Russian Association of Indigenous Peoples of the North and Octavia the Inuit Circumpolar Council.  Flossy was also part of Norwich School’s WYCOMAC delegation, representing Canada.  Over two days of sometimes intense diplomacy, they helped to compose and reach consensus agreement on a declaration respecting the special knowledge of Arctic Indigenous peoples, supporting its transfer from elders to youth, and promoting its importance to humanity as a whole in the face of climate change and other environmental threats.

Our delegates distinguished themselves well in both simulations – taking leadership roles around the WYCOMAC negotiating table, and drafting and shepherding through a Security Council resolution.  Well done to all of them!  Special congratulations must also go to Amy and Charlie for being awarded special commendations as outstanding delegates in their respective simulations.

We are delighted to hear from them here as they offer their own perspectives on the conference as pupils and delegates:

"With Wycombe Abbey having postponed their original conference in January due to the pandemic, we were delighted finally to have the opportunity to travel there on the 6th of May.  The postponement and late dates meant it was a smaller conference than usual, but we reached the quorum to run a simulation of the Arctic Council, and we discussed the issue of passing Indigenous Knowledge from elders to youth.  It was also the first Polar Aspect Model Arctic Council featuring only female delegates, which is impressive in its own right, and which added to the experience as we all felt comfortable in making new friends. When we arrived at the conference, we were greeted warmly and began our simulations.

On Friday afternoon, we began a simulation of the Sustainable Development Working Group, discussing our general views and finding areas of agreement. We were able to talk freely and we were conscious of establishing good relationships with fellow delegates, in order to make whole process run more smoothly. Once we had finished our diplomacy for the day, pleased with the point we had reached, we were then graciously hosted for a dinner by Wycombe Abbey. With three delicious courses and fancy ‘mocktails’ -- and even a disco -- we returned to our hotel in good spirits.

Our Saturday morning started early with a Travelodge breakfast before we began a simulation of a Senior Arctic Officials meeting. With some experienced MAC delegates present, we were able to make use of our limited time together. Bibi and I were able to pre-draft clauses, which allowed the simulation to move quickly and effectively. In just three sessions, we had drafted our declaration; this was an impressive achievement. With helpful steering from Dr Speca where it was necessary, and speedy ‘rapporteur-ing’ (documenting our discussion) by Mr Joshua Gray ON, we were able to grow in our confidence, practising negotiations and collaboration.

In our final session, we held a simulation of a Ministerial meeting, in which every minister ratified the declaration. After refreshments, we came together for our closing ceremony, during which Finland received a commendation for the best Arctic State delegation, while the Russian Association of the Indigenous Peoples of the North received a commendation for the best Arctic Indigenous peoples’ delegation. I believe whole-heartedly that my experience of WYCOMAC was improved because I had been in the Secretariat for NORMAC (our own Norwich Model Arctic Council), as I was able to understand the process. The five of us had an excellent experience in High Wycombe and look forward to returning next year!"

"Running simultaneously to the Model Arctic Council, Wycombe Abbey put on a reduced-size Model United Nations conference. I was representing the United States of America as the only delegate from Norwich School.

On Friday, we began with lobbying, where we all sought to obtain as many signatures as possible on our clauses and resolutions on the two topics: missile testing in North Korea and human rights abuses. Next, we moved onto debating the Afghanistan problem after a brief break for drinks. Either side of lunch, debate was fruitful and surprisingly swift, which is uncharacteristic for simulations of the Security Council! I passed five out of the eight clauses of my resolution, which was the only resolution picked on the topic. It sought to solve problems of the abuses of women's rights, and the rights of members of the LGBTQ+ community. After an explosive visit from the ambassador of Afghanistan, who represented the views of the Taliban government in convincing style, debate slowed down, with fewer clauses being passed late into the afternoon.

Delegates returned on Saturday to debate the topic of nuclear missile testing in North Korea. Debate on the second day was far more laborious, with all of us having to work hard to reach consensus among the states that hold vetoes. China and Russia played their policies very accurately, making it hard for the room to progress towards agreement. However, we eventually passed some clauses, proposed by Brazil, which sought to investigate the extent of nuclear testing, and sanction the government for ballistic missile tests. The ambassador of North Korea visited the council after lunch and received some tough questions. After another hour of debate, the clauses were finalised, and the resolution passed. Not all delegates were satisfied, but it was a good attempt at diplomatic compromise on a controversial topic. After the classic ‘joke awards’ and some magnificent closing speeches, awards were given to the UK and the USA.

Special thanks must go to the amazing chairs, the ambassador of both North Korea and Afghanistan (both played with great realism by the same Wycombe Abbey pupil), Miss Monteil of Wycombe Abbey for organising the conference and Dr Speca and Mr White for helping, driving and arranging the trip. I look forward to next year’s visit to a full-scale Wycombe Abbey MUN."

07.07.22 Macy-Jane Hewitt and Izzy Kirby highly commended for their entries in the Young Norfolk Writing Competition
Academic Arts
07.07.22 Alex (L6) shares his experience of winning the Anthea Bell Prize
Academic
04.07.22 We Learn from Isabella Kirby About the Life Cycle Of The Stars as Part of Her Work Towards a Youth STEMM Award
Academic