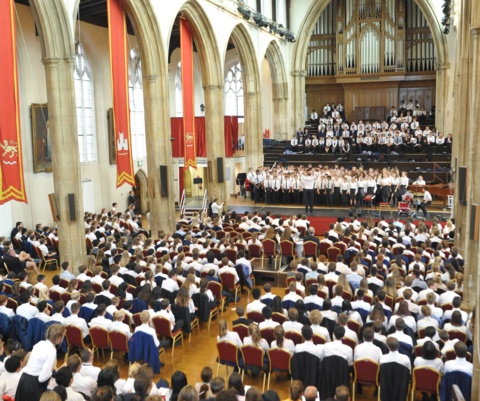 My Year At Norwich School

Morgan Hardy, who is now in her first year in the Norwich School Sixth Form, tells us about her last year, which included taking her GCSES, as part of the Senior School:

"My last year at Norwich School started, as it has since I joined the school, in the beautiful surroundings of the Cathedral Close. It was busy, really busy, I was excited, my friends were buzzing and there was an energy amongst my peers.

We started the year with a welcome assembly in the cathedral, although a familiar place to me, it never fails to leave me full of wonder and awe.

Already there was an enthusiastic atmosphere brewing, as the annual House Music Festival, where every member of school comes together to sing in St Andrew's Hall, approached.  Each House is pitted against each other, to win the coveted title of 'Best House Song'. Aside from Sports Day this is the main House event of the year and brings all eight Houses in the school together. Ensembles, orchestras and choirs could showcase their talent and show off the skills they had learned. Everyone was talking about "Who in our house (Nelson) could sing, could play the piano, did we have a conductor in our ranks?"

Then there was the school committees, this year I had been chosen to be on the head of the school food committee. I believe one of the most important aspects of school life is most definitely......our tummies!

Opportunities were rife this year. But this year I knew I needed to really focus on my exams. I was determined to plan my revision and stick to it. I would spend Sunday mornings on my most dreaded subject... Physics! There- I'd made a start.

It wasn't long until I realised there weren't enough hours in the day to be involved with every event. I made a decision to spend more time focused on revision this year, mixed in with a little R&R. This was accompanied by involvement in one of many clubs and society's; my choices included the Pop Choir, the prestigious Chapel Choir, as well as the green group - a society that helps educate pupils on all matters ecological.

Before I knew it Christmas was upon us and mock exams were imminent.

Our carol service took place in the cathedral, lit with candles held by over a 1000 people; it really was a sight to see, parents, children and staff all together as one. It's difficult, no it's impossible, to forget the staff panto, which really ended the term on a high note. Seeing my chemistry teacher dressed as snow white, singing at the top of her voice was priceless.

Over the holiday I spent almost every day brushing up on my old text books, there was so much to review and so many presents to wrap!

Mocks turned out well, but there was room for improvement. My teachers offered advice and support, afterschool clinics became part of my daily routine.

The start of 2017 also saw a singing exam, a public speaking competition and the start of the new rowing season as well as working with the Hamlet charity - a really worthy cause.  Female rowing is really growing at the school. The new girls' rowing team was beginning to come together, we were growing into a formidable force on the water!

The public speaking competition went well, a win in the Regional Finals! Could this be a 2017 roll? Next, we had to speak at Magdalene College Cambridge! What a great day we had, and returned feeing proud to have represented the city of Norwich so well.

As the weather became warmer my revision was really hotting up too, study leave was as busy as I had ever been, I felt productive and confident around the forthcoming exams.

The time for my first exam came around, then a second, then a third until finally all 23 exams had been taken.

After the exam period is over, the school embarks on its end of year creative arts festival Gather. The festival saw the school put on 10 different performances, celebrating the many talents of pupils here. The festival came to a climax with our Gala Night. The event had an almost 'festival' feel to it, with a stage and crowds all in the Lower Close playing fields. There was dancing, singing and acting all hosted by our head of school Benedict Smith. The audience made up of our parents, Governors, teachers and guests, including the Lord Mayor, laughed and sang along. I performed a sketch that I had written for the show and sang Tom Lehrer's Elements song accompanied by my good friend Jonathan Jolly, Norwich School's Music scholar. As always he never missed a note!

Several weeks later, results day! I found myself in a huddle with my friends in the school grounds, It was silent, no one wanted to speak, I found myself in tears, I couldn't speak as I open the envelope.  9 A*s and an A! I felt, excited, euphoric. I had an overwhelming urge to hug my friends, how did they do? Were they all as happy as I was? There were good results all around!  I wanted to thank my teachers, I even want to hug my younger brother for all the support he had given me!

Hard work, revision and lots of fun along the way; the winning formula. A fitting end to a great year at Norwich School that I'll never forget.

07.07.22 Macy-Jane Hewitt and Izzy Kirby highly commended for their entries in the Young Norfolk Writing Competition
Academic Arts
07.07.22 Alex (L6) shares his experience of winning the Anthea Bell Prize
Academic
04.07.22 We Learn from Isabella Kirby About the Life Cycle Of The Stars as Part of Her Work Towards a Youth STEMM Award
Academic