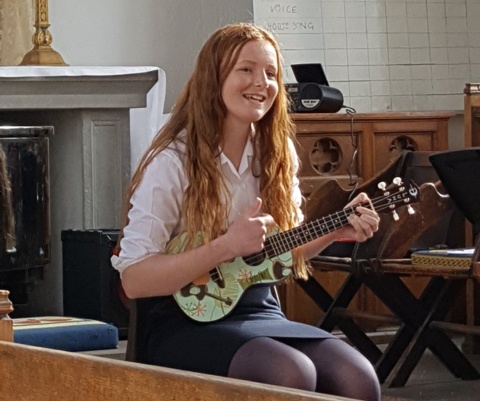 My experiences so far as a new Sixth Former

Megan Blair (L6P) writes about her experience of starting Norwich School as a new sixth former this year.

My name is Megan Blair and I recently joined Norwich School as part of Lower Sixth. My first half term at the school has been full of new opportunities and has made me realise that picking Norwich School was definitely the right choice for me. The first few weeks can only be described as jam packed, with new surroundings to get used to, auditions for the school musical and the House Music Festival. As a member of Parker house, I volunteered to sing the Voice Solo for our house and also took part in Part Song. The House Shout was lots of fun to rehearse and perform and meant I got to meet lots of new people within the house from different year groups who I wouldn't have had the opportunity to meet otherwise. While the results may have concluded that Parker fits the role of Hufflepuff from the Harry Potter series (as mentioned by Mr Fisher in our first assembly), the experience was enjoyable and showed that Parker has plenty of spirit. I started the term taking 4 A-levels that consisted of Theatre Studies, History, English Literature and Classic Civilisations. I was originally unsure whether to take Classics as my high school didn't offer it as a GCSE so I had never studied it before. However the school encouraged me because I enjoy History. Whilst I'm glad I tried this, after several weeks I decided to drop down to 3 A-levels as while I loved my teachers, I didn't have a passion for the subject. After a half term with my three subjects, I'm really enjoying all of them. In terms of extra-curricular activities and clubs, I was encouraged to join Amnesty by some of my classmates and I'm currently part of the ensemble in the school production of Sweeney Todd. Being part of these activities has been great for meeting new people outside of my classes and study periods. Furthermore, I'll also be taking part in the first acoustic open mic night that the school is holding at Norwich Playhouse, known as Unplugged. As part of the evening, I'll be showcasing one of my original songs alongside other singer-songwriters and musicians. I'm really excited about further music and drama opportunities at the school, including the new theatre facilities opening and I can't wait to see what happens next.