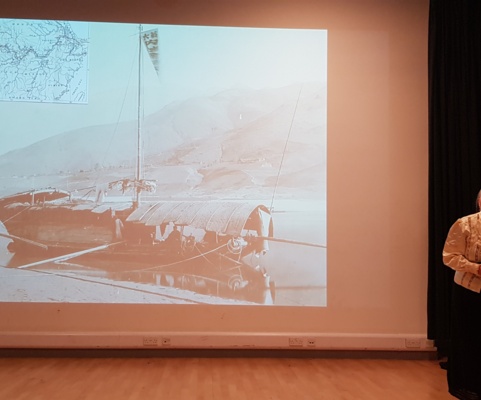 Norwich School has for many years been proud to host the East of England branch of the Royal Geographical Society (RGS) in their excellent series of public lectures delivered by experienced and engaging experts. The school hosts a regular programme of interesting talks on site throughout the year to enhance the school’s intellectual offering to its community of pupils, alumni, friends and parents as well as to the wider city of Norwich. These lectures form part of that.

An appreciative audience on 26 May 2022 was treated to a talk in Norwich School’s Blake Studio given by explorer and author Jacki Hill-Murphy, who spoke about the life and adventures of the Victorian explorer and naturalist Isabella Lucy Bird (1831-1904), the first woman to be elected Fellow of the Royal Geographical Society.  The lecture, which was partly delivered in character and in costume, featured many of the exquisite, original magic-lantern slides that Bird herself presented to the RGS in her 1872 lecture on Western China. In our talk, Ms Murphy-Hill drew upon the extensive research that she had conducted for her new book The Life and Travels of Isabella Bird, including retracing Bird's journeys across the globe.

She recounted the many hardships and dangers Bird endured travelling solo amidst spectacular mountains, poverty-stricken villages and remote river gorges, with only Chinese natives accompanying her, many of whom were encountering a female Westerner for the first time. Bird’s extensive journals tell of her preference for this dangerous, itinerant life compared to the soul-crushing Victorian patriarchy back home in England.  It was an extraordinary homage to a brave but now largely forgotten female pioneer.

This particular series is now paused until the autumn, but we will welcome the Norfolk Cambridge Society soon for their upcoming public lecture entitled "What is a Nation?",  highly relevant considering the conflict raging currently in Ukraine.

Speaker: Highly respected academic Dr Matthew D'Auria, Associate Professor at UEA and a leading historian.
Attendance:  Open to all, not just those who attended Cambridge University, and is also suitable for Sixth Form pupils (accompanied by an adult).

Pricing: £15 per person, to include a drink afterwards in the refectory. Tickets priced at £5 are available to sixth form pupils.