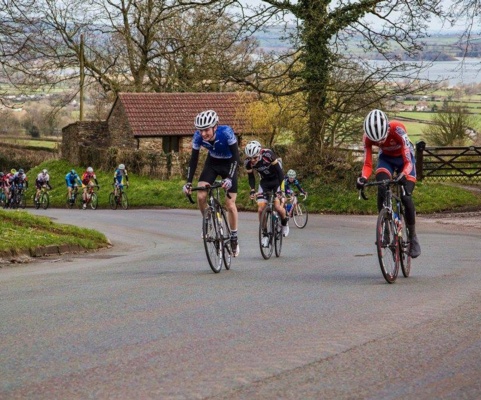 International Cycling Tour of the Mendips

Over Easter I travelled down to Bristol with the Eastern Region Cycling Team to race in the 2 day, International Tour of the Mendips. The two stage race was part of the British Junior National road series and involved over 180km of racing against the best 17 and 18 year olds in Britain. The first day consisted of a 3.5km climb then 7 laps of a rolling 13km circuit, totalling 104km. Being my first national junior road race, I was feeling nervous and did not want to be caught up in one of the many crashes which were bound to happen. The first 5 miles were neutralised and when the lead car pulled away, the race immediately started to stretch out on the climb. The pace was kept high until a break of 11 riders managed to escape up the road and within a lap they had a minute and a half on the main bunch. Torrential rain and hail on the third lap blew the race apart, and with speeds of over 40mph, the wind chill caused many riders to pull out with hypothermia. I managed to stay near the front of the chasing group and with 2.5 laps to go, the race was back together. The remaining 45 minutes of the stage was carnage with groups going up the road and the pace high. After almost 3 hours of riding, I rolled across the line in the second group on the road, along with 2 team mates, 28th and 59 seconds down on the leader.

Going into the second day we were looking to defend our lead in the team classification, which we were leading by almost eight minutes, as well as finishing highly on the overall general classification. This stage, although shorter, contained three major climbs and I wasn't sure what to expect, especially coming from Norfolk! The race split up on the second climb and from then on it was a battle to lose as little time as possible. Not knowing how many groups were ahead, I attacked on the final climb and managed to hold onto a small lead over the main group until the finish. I finished the stage in 21st which took me up to 20th overall on the general classification and 5th in the young riders classification (for first year juniors). As well as this, there was the added bonus of winning the title for the fastest team over the two days. It was a tough two days but great to race against the best riders in the country and I hope to go back next year to race again!