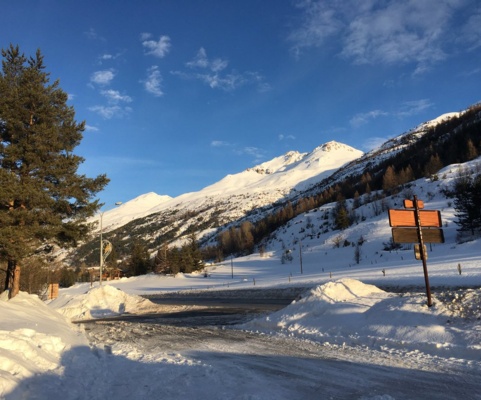 "In the Michaelmas term, Mrs Fairweather introduced the idea of the 5 ways to wellbeing. The 5 ways to wellbeing were created by the New Economics Foundation in 2008. Their aim was to develop a set of evidence-based actions that they believe can improve wellbeing for children and adults. They included:

I was reminded of the 5 ways to wellbeing when talking to Norwich School pupil, Cristina Moretti-Miles, about the recent school ski trip. She spoke about how much she’d enjoyed spending time in the impressive snow-covered mountain ranges of France with the picturesque villages and chalets. She enjoyed the sense of satisfaction of reaching the bottom of the slopes and looking back up the mountain at how far she’d travelled. As we talked about the different and exciting way she’d spent her time it gave me an idea for an assembly.

This morning I’ve invited a few L5 and M5 pupils to share some of their personal highlights from the trip." Mr Rowlandsan, Head of 5th Form.

"In the first week of our Christmas holiday, 29 intrepid pupils journeyed to the edge of the French Alps to Serre Chevalier, for a week of skiing. Despite an 8 hour journey time, the week was enjoyable, and the weather did not disappoint, with five full days of sun, and amazing skiing conditions.

The skiing itself was full of ‘thrills and spills’, and very memorable moments. One of my favourites occurred on the fourth day when the weather turned. Fog drifted in from the valley and it began to snow - leading to a ‘white-out’ - much to the dismay of our instructors. Not only did this lead to one of the most exhilarating descents I think I will ever experience - but a rather spectacular fall from Mr Leek - which ended with him, lying in the snow in a spread-eagled - somehow his dignity remained intact." Ben Dernie

"I enjoyed having the chance to film much of the ski trip. I captured a lot of falls, including Ben’s impressive forward roll down a red! In the Advanced Group, we had the most, and probably the worst falls. We had around 15 falls a day, some of them on soft powder, some, on solid piste, such as bombing down a black run and wiping out, crashing into a 6th former on the way!

We covered a lot of ground and were always trying to go as fast as possible. Our instructor sometimes tried to stretch us by making us do bits of off-piste that many of us didn’t think we were capable of, resulting in pretty much everyone falling over. We did lots of jumps, some successful, some really not - I know I definitely face-planted over one of them! But overall, I am pretty sure everyone had a great time." Natalie Chalk

"One of my personal highlights of the trip was spending time with my friends outside of school, doing something we all enjoy. Skiing is a very sociable activity, so we could chat whilst skiing and in our breaks.

When we weren’t skiing, we could walk the icy path to the shops to get some food or hang around the hotel before dinner. We had plenty of downtime after a long day skiing, and before and after our evening quiz." Jacob Gandy

"This trip was my first time ever skiing and even for a complete beginner like me I still enjoyed it.

My favourite bit of the trip was when I skied down a long winding run to the very bottom. It was a great feeling to ski down the stunning slope. I found it quite relaxing to do it as we were encouraged to go at our own pace.

If you get the chance to give skiing a go or even try something else you’ve not done before I’d definitely encourage you to go for it. You might just love it in the same way that I now love skiing!" Henry Duval