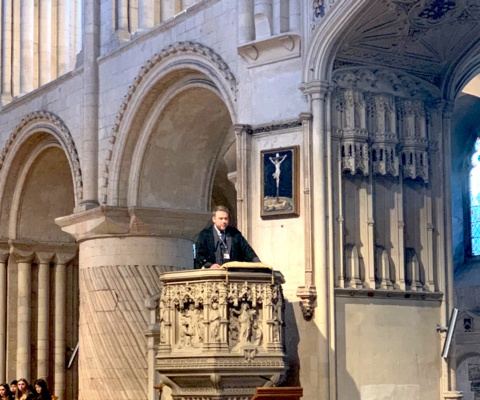 "Why do people study maths or become mathematicians?" by Dr Kirby

"Good morning school. Ok, I’ll admit it - I have absolutely zero love of marmite or vegemite (marmite) – you may have a similar feeling too – or you may be of those that profess to love it. Now, I don’t want to have a go at marmite or its lovers, but of all the things that civilisation has given us, I think marmite has to be one of the worst. Just saying! My opinion only. Why am I telling you this, though?

Well, I live in a world where the thing that I believe is the greatest gift from millennia of civilisation is often dismissed for its perceived impenetrability and general pointlessness (I mean, when is anyone ever going to do anything with regard to Pythagoras’ Theorem in ‘real-life’?) but perhaps, fortunately, compulsory by law. How does it feel? It feels like the feeling when you see a film that you decide is absolutely brilliant and you tell everyone you know to go see it and you await their response - only to be told that they hated it. That is, in general, the world that a mathematician lives in. Why?

Well, sadly there are many reasons but on the other hand, one reason for this is that my subject seems to be roundly dismissed as being all about ‘doing sums and getting the right answer’. This latter point is, of course, a wild simplification; yes, school maths tends to be about being able to understand the subject through routines and techniques that you will seemingly rarely if ever, use in ‘real-life’. Of course, I’ll admit to this being a part of maths, but is really only a small subset of what the subject becomes.

Even if you are someone that can master these ‘pointless’ routines and techniques then you will be seen as either (i) a God, (ii) a wizard, (iii) a genius (iv) just a loser or (v) just plain weird, or even a combination of all of these things, even though I am not sure all are mutually exclusive (if you fit into any of those categories just mentioned, you’ll know what I mean by this). This is of course, potentially great for your ego if you like to show off, which most mathematicians don’t.

So why do people study maths or become mathematicians? Simple - the subject becomes hugely varied and attempts to answer centuries-old and super modern questions from, e.g, “what is the distribution of prime numbers?”, “How big is infinity?”, “How can we understand how to improve the aerodynamics of aeroplanes or helicopters? (my specialism, by the way)” and “How does the output from this climate model demonstrate a forecast of climate change long into the future?” Questions in my subject become very relevant, more obviously in an applied sense: take the last one - no one has sat in an office, just thinking and thought “yep, I predict that the global temperature is increasing” it is calculated very carefully using mathematical models that we know model climate and weather systems very well, principally by analysing the interactions between the ocean, atmosphere and landmasses. It is not a guess, but who would have thought that maths can be applied to climate over the whole globe?

But what about the first two items I mentioned on the distribution of prime numbers and how big is infinity, do they have any real use, or should we not care about those questions either? Prime numbers are used to code individuals: there is definitely more than one Simon Kirby in this world (for instance, one was an MP for Brighton Kempton and another is a cognitive scientist in Edinburgh), so how can we be told apart? Answer – code me as the product of very large prime numbers and make me unique. The infinity question makes the greatest mathematicians sick, literally: Georg Cantor, the mathematician who was able to show that there are an infinity of infinities all with different sizes, lead him to chronic depression simply because no one believed him, even though he proved it and has consequently become immortal (he was correct, by the way).

So, what is the point of what I am telling you? Well, maths as you know it is seen as fairly pointless, remember, so why should there even be one to this? In truth though, I want you to know that this subject is much more than ‘getting the right answer’, it is about thinking, seeking pattern and developing the language of the universe.

Or, of course, if you are like me or one of the super-giants of the academic world then a rich, unimaginable beauty. After Leonardo da Vinci discovered this for himself, he never wanted to paint again. Commenting on Maths, Albert Einstein described it as the poetry of logical thoughts.

Why marmite? Well, I think it’s fair to say that Maths is viewed in a similar way to marmite. Maybe, like my relationship with marmite, you’ll roundly dismiss maths. This assembly is probably not an advert for my subject but, to you, I say: we have a language that translates into everything we have today, from the computer in your pocket to the microphone I am speaking into, to building this cathedral and even to understanding why we exist – why wouldn’t you want to read the book of civilisations past and help write its next chapter?"