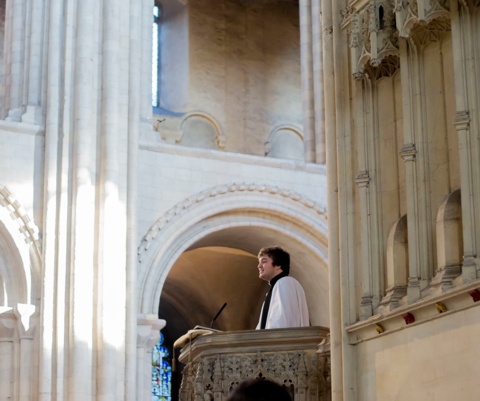 View from the Pulpit: 'If you fail to prepare, prepare to fail' Repton 200 assembly

Jack Brandford, Curate and ON 2006-2008, spoke in Cathedral assembly on the 9th March about Humphry Repton and how, 200 years on, we can still learn from his positivity through failure.

23 Jesus answered them, 'The hour has come for the Son of Man to be glorified. 24 Very truly, I tell you, unless a grain of wheat falls into the earth and dies, it remains just a single grain; but if it dies, it bears much fruit. Good morning school, my name is Jack and I am a Curate (or trainee Vicar). This basically means, among other things, that when I grow up, I want to be just like Mr Child. As well as being a trainee vicar, I also used to come to this school, and to be honest, looking around this morning, I don't think much has changed in the past 10 years. The blue blazers are the same; Mr Curtis is still about 3 feet taller than me; (depressingly) Mr Bateman can still grow a better beard than me; and you guys clearly still have ONs coming into assembly to send you all to sleep first thing in the morning - so lucky you!

Now I'm not sure if this has changed, but when I was here we were regularly told this famous maxim, 'If you fail to prepare, prepare to fail.' Generally, I was given this advice as part of the Holy Trinity of comments that my teachers seemed to regularly need to say to me personally for some reason or another: 'Jack, do up your top button'; 'Jack, get a haircut'; 'Jack, if you fail to prepare, prepare to fail.' We also heard it a fair bit from the front in assembly too though, and for very good reason. Preparation whether for exams, a concert, or a rugby match, is really important and it will usually make a big difference on the day. But perhaps, just sometimes, that saying needs to be qualified; because sometimes in life we will prepare, and we will still fail. Sometimes, an exam won't go our way. Sometimes, we can train as hard as we possibly can but 'the Gresh' will still nick a late winner. Sometimes, we won't get our first choice of uni. That can be hard, but that is a reality of life.

So yes, if you fail to prepare, you should probably prepare to fail. But if you do fail, or loose, or fall short of your expectations, at whatever it might be it can be helpful to remember another little adage. This saying, is taken from one of the great philosophical works of the 20th century - Chitty, Chitty, Bang, Bang. 'From the ashes of failure, grow the roses of success.' You see, failures in many ways are priceless because they give us the feedback that we need to take the steps, to make the changes we need to make, to grow, to evolve and generally to do better.

Which brings me on nicely to the reason I'm actually here. I've been asked to come into school this morning to speak about another ON. An ON who really knew the truth of that statement, 'from the ashes of failure, grow the roses of success.' This guy was a serial failure. He was at this school for two years, but didn't do particularly well in his studies, so he followed his Father into business. He set up in Norwich as a textile merchant, but the business failed. He had several rather unsuccessful years in politics before taking on another commercial venture where he invested in a system of mail coaches. This business almost made him bankrupt while his friend, and fellow investor, John Palmer made a fortune.

However, from those ashes of failure, he learnt many things. Eventually, he set out on one final business venture in which he sold his services as a 'landscape gardener' the first person ever to use that term. His gardens quickly became very popular and have left a lasting legacy. His works survive in London at Kensington Gardens, Russell Square and Bloomsbury. The royal parks and gardens of Regent's Park, St James' Park and the Brighton Pavilion were laid out according to his designs. Here in Norfolk we have two fine examples of his work at Catton Park and Sheringham Park. He was so famous during his life time that he made cameo appearances in Jane Austin novels, and after his death, he had a House named after him at Norwich School. He is of course, Humphry Repton.

Repton is actually buried in the churchyard where I work in Aylsham and this year is the 200th anniversary of his death. Our church is heavily involved with a national festival, starting at the end of this month, to celebrate his life. There will be concerts, lectures, workshops, children's activity days, pensioners' activity days, art shows, documentary films, a Repton Gin is being distilled! It's all very exciting and I know lots of you in Repton House have already volunteered to help at some of those events so thank you so much for that.

It is perhaps, quite poignant though, to stop and think that this serial failure of a man, is being remembered 200 years on, not for his failures but for his successes. His legacy of beautiful gardens that have given joy to millions. From the ashes of failure, grow the roses of success. In Repton's case, this is quite literally true as his grave is basically a Rose garden. There is a tablet in this garden with a very telling little verse written on it which talks about his remains 'blending, melting into the Earth, to give form and colour to the Rose, whose vivid blossoms will cheer mankind.'

Even when Repton's biological processes that kept him alive failed, he managed to turn that into something positive, something that gave life. His very body was used as food for roses to bring people a little bit of cheer. And perhaps that shouldn't surprise us considering the great horticulturalist he was. He would have known only two well that in nature the apparent failure of death often brings successful new life. An apple, is alive on a tree, when it falls to the ground, detached from its life-giving tree, it is dead. If the conditions are right though, it will produce new life in a new tree. The death of the fruit brings life. It's almost as if this death bringing life cycle is hard wired into creation. As if God has made it that the apparent failure of death, is in fact, the engine of life.

This is of course, the picture of creation that Jesus used in our Bible passage, 'when the grain falls into the earth', it brings new life, new fruit. Jesus is of course hinting to his friends about his own coming death. His death on the cross would have been seen as an enormous failure to all of those around him at the time, but Christians believe that it was the apparent failure of the cross that brings the ultimate success of new life to the whole world.

So, remember the lesson of Repton's life. Work hard, be as prepared as you possibly can be. Knowing that sometimes we will all fail. That doesn't mean though, that if we learn from our failures, that greater success won't be just around the corner.