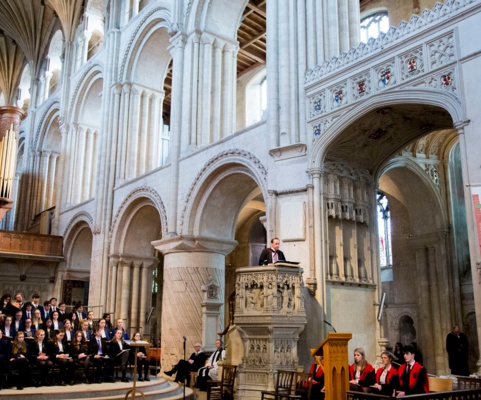 There is a phrase which I have struggled to get my head around in recent weeks, even though it has been used a good deal in the media and even though it relates to something of which I have professional experience and in which I have a deep interest. The phrase is armed teacher. You will be aware that it is a serious political proposal in the USA for legislative change in light of a mass shooting which took place in Florida last month. Now I understand an arms teacher: like anything, if you want to get better at something you might want to be taught how to do so; knowing how to handle weapons might involve going to someone who can teach you to do that. But a teacher being armed is something different: that is to say that someone will be carrying a weapon while involved in education of a different discipline, usually of young people. As someone who believes in holistic, values-based education, for me an armed teacher seems paradoxical, almost a contradiction in terms.  I certainly had sympathy with American teachers reacting to the proposals, such as:

"Anyone advocating such legislation has no understanding of what goes on in schools or doesn't care".

"Arm me with pencils so my students can write new laws".

I am aware that this is not a situation we are going to have to confront in the UK any time soon because of the very different gun laws over here. However, for me it has thrown light onto the importance of what we try to do at Norwich School. Yes, we certainly want you to get better at maths, English, creative subjects, languages and sciences, establishing a broad base of knowledge and skills before specialising as you get towards the top of the school. We are also fortunate that we can encourage you to discover interests or enhance skills outside the classroom. Yet we are most pleased when, along with your families, we teach you how to treat others appropriately and practise behaviours such as being caring, humble or altruistic.

And there is one thing to come out of the Marjory Stoneman Douglas High School shooting which I think is positive. It is the proactive attitude of the students of that school and others of their age around the world who have entered the debate on gun control and are emerging as an effective political voice. Indeed, they seem to be the only group able to challenge the power of the gun lobby in the USA, centred on the National Rifle Association (the NRA). It is early days but several leading firms have ended preferential deals for NRA members and there are more public voices taking an anti-NRA stance. Why should this be? Scott Galloway, a marketing professor in the USA, said this:

"The most valuable person in the world of consumer business is an 18 year-old. Their recent galvanisation on the issue has made the NRA very uncool". It may seem counter-intuitive to be talking about such an emotive issue in terms of marketing, but no appeal to values has worked in the last generation, even after incidents such as Sandy Hook or Las Vegas, so the courting of American young people by business to effect change will do just fine. Fortunately, you do not have to deal with this issue yourselves, but I hope you take their proactivity as an example: be engaged with the world around you; work out what you care about and do something about it.

And we all know there are plenty of issues about which to be animated in the modern world. I think the difference is that issues such as the Brexit referendum and US gun control have directly impacted on your generation and made you realise not only that you can get involved but that you should get involved. I hope that Norwich School is giving you values and platforms for behaviour which will encourage you to participate in ways which will improve situations for you and those around you.

For example, I know that there will be a spectrum of political views among you and that is fine; there will be Leavers and Remainers, Conservatives, Labour supporters and those of other parties. However, I am afraid that I am not giving you carte blanche to say or do whatever you like. Unlike Ewan Brett's excellent address to us this week about the Youth Parliament, candidacy for the Junior Monster Raving Loony Party is not going to happen any time soon and I am not about to give this platform to anyone for any cause.

I want to couch my guidance on different lines, lines which are apolitical: you go to a school which is based on a loving, compassionate community. Belief in such values is what we wish to instil in you and hope you will take as leaders into the wider world when you leave Cathedral Close. How you act on it is up to you: you may be inspired to target the global community's sustainable environment because of what you have done in our Green Group; it may be interpreted as a focus on individuals facing difficulties through work as a peer supporter or community service. It might even lead you to consider a career in unarmed teaching.

At this time of year, we think of the Easter story and we have been helped by the Chaplain's ABC this term: atonement, baptism, cross. Whether Christian or not, these subjects and the related key themes of love, sacrifice and forgiveness are helpful guides for our lives today; they are certainly interwoven with the school's ethos. These themes are not restricted to adults but apply just as much to young people; I encourage you to absorb them and see if you can put them in practice.

I wish you all a restful holiday.