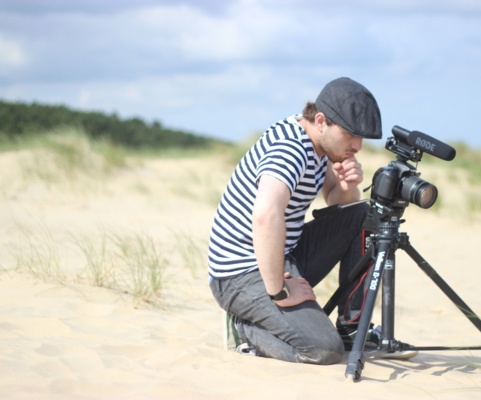 U6 pupil and film-maker, George Moore, tells about his campaign to raise funds for his latest film project I'm George Moore, a filmmaker in my last year at Norwich School.

I have been involved on professional and amateur productions as a director, a producer, a cinematographer, a sound recordist and much much more, and have worked with and been mentored by filmmakers from great cinematic institutions such as the BBC, Channel 4 and the BFI.

At 16, I made my own no-budget, 45 minute feature adaptation of the novel The Ragged Trousered Philanthropists, made with six voluntary professional actors and a friend to hold the boom. I was lucky enough to attract the attention of celebrities, the press and politicians to publicise the film through social media. You can check it out here: https://www.youtube.com/watch?v=cQLqyw3YQ4M

My most recent solo short was a pirate film written as an exercise in visual storytelling:

I am now embarking on a new project: 'At Midnight', but in order to make it happen I need to raise a small budget for the film - I am doing this through crowd-funding on Kickstarter.com.

At Midnight (or, Auguries of Innocence) is a new film, loosely inspired by the works of Selma Lagerlof and William Blake. It deals with themes such as homelessness, alcoholism and violence, but sees them through a magical-realist eye, using fantasy elements to personify the themes, bringing them to life on the screen.

Loosely based on the 1912 Swedish novel 'Korkarlen' by Selma Lagerlof, and it's 1921 silent film counterpart (both in the public domain), 'At Midnight' follows the story of the chronophobic and homeless David Holm, on one chilling New Year's Eve. He recalls a myth that says the last person to die at the stroke of Midnight on New Year's Eve has to take on the burden of the grim reaper for the whole next year, each day feeling like 100 years. As this myth becomes David's reality, he has to face up to his mean-spirited past, and attempt to reconcile his mistakes before it's too late.

We need the support of as many people as possible in order to make this happen, we can't do it without you, and we wouldn't want to. You can also help by sharing the page on social media / e-mail / word-of-mouth / semaphore to friends and family! My website http://www.georgemoorefilms.com/ contains information about me and my previous films, and a link to the kickstarter campaign, which you can go to directly here: https://www.kickstarter.com/projects/504872537/at-midnight-or-auguries-of-innocence-independent-f