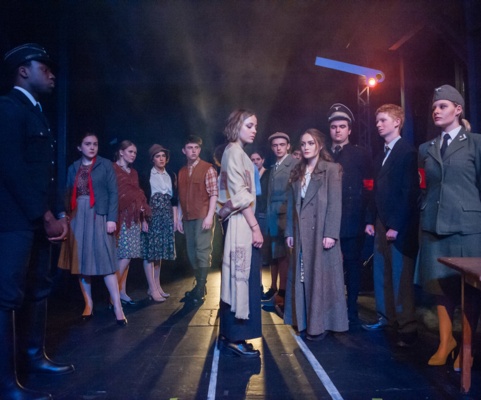 Two Norwich School pupils give an inside insight into what it was like to be part of the Senior Play 2018, 'Judgement Day'. "A whirlwind few months with a company who never failed to be there for one another, or to commit. From the stage management crew to our technical team who joined the crew at the Puppet Theatre, to put on such a amazing show for us.

Working towards the performances of Judgement Day was an adventure in itself. The line learning, the activities and changes; the crew were all so caring and focused, even when nerves kicked in. The atmosphere surrounding the group was so energising and close it felt sad to realise that on Friday night, after our final show, that was the end of the magnificent journey we had taken together.

The week of the performance was like a silenced steam locomotive. With the coal being our drive, excitement and compassion for one another and the steam being the nights we put on, the laughs and the unmissable vibes that were reverberating from person to person, throughout the rehearsal period right the way through to the last bow.

The entire company owes a huge thanks to Ms Ziegler and the individuals at the Puppet Theatre for the time we had and for teaching us things you can't find in a classroom." "For five weeks, a talented cast of actors, set designers, directors and creative leaders worked tirelessly on making the Senior Play 'Judgment Day' a success. Though exhausted by the end of the process, spirits and morale remained high and the ultimate result was worth every second.

The rehearsal process, lead by our very own Ms Ziegler, was a long and at times tedious process of reading and re-reading lines. Going over each scene until it ran smoothly and effortlessly. Exercises and warm-ups included activities which aimed to keep the cast in sync and strengthen bonds - many of which are sure to last a lifetime.

Despite the setback of missing our final week of rehearsals due to the snow days, the final three productions were each a large success and the whole cast should be immensely proud of themselves. Many questions were flying through the heads of everyone towards the end of rehearsals, with everyone asking whether or not we were truly ready. How would I know when to come on stage? What if I fall through the massive hole in the middle of the floor? We weren't given the chance to have a full run-through before the first performance, and so when that went smoothly and almost without fault, minds were set at ease and confidence grew. Being able to perform in an ancient space such as the Puppet Theatre was an incredible experience in itself, and being able to perform with such a fantastic cast and crew just made the whole experience spectacular.

Thanks should go not only to Ms Ziegler, Mr Simpson, Mr Webber and the rest of the fantastic team at Norwich School, but also to Darren and the rest of the crew at the Puppet Theatre. They work constantly to keep the theatre alive and running for almost nothing, and having them on board to help with our show was a truly humbling and wonderful experience. We were able to learn more about the theatre, and Darren's many stories about the building kept spirits high, even through the 12 hour rehearsals. Thanks to Darren and his team, our play was truly able to come alive on stage."