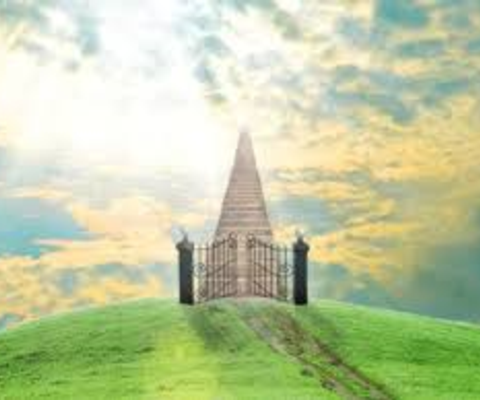 The Kingdom of Heaven is within you Last week I was walking past Eddie on the gate. He stopped me and said he'd remembered a story that he wanted to tell me. I thought I'd begin by repeating Eddie's story (which is set in rural Ukraine under communism).

A priest arrives for the first time in a new village where he's going to be working. The first person he meets is a small boy. 'Are you the new priest?' he asks. The priest puffs himself up. 'Yes, I am your new priest. It's very nice to meet you. You are very welcome to come to the church down there... and watch me take my first service. In the meantime, if you like, I will explain to you how you can get to heaven.'

'You're kidding', says the boy. 'You can't tell me the way to heaven. You don't even know the way to the church - it's over there!'

In Jesus' time there was a great deal of interest in heaven and how to get it. You can understand this better if you consider what life was like for Jews living in the Ancient Middle East. The Romans had taken over the country, which was hard to live with in many ways. Apart from the crippling taxes, it was a real blow to their national pride, and the Jews longed for the day when a new kingdom - the kingdom of heaven - would arrive and change everything. People imagined armies travelling great distances and bringing about a turnaround in the country. Or they imagined a great enthusiasm for religious rules which would bring God closer from whatever far-off place he had gone to.

But Jesus taught something different. He didn't think the kingdom of God was some sort of military or religious whirlwind. He likened the kingdom of God to something that starts small, like a seed or a measure of yeast, but then grows and spreads until it's strong and worked into everything.

And he didn't talk about heaven as something 'up there' or 'over there'. He said, 'The kingdom of heaven is within you.' No need to go peering into the distance to find it; it starts inside you. That's how the Kingdom of Heaven grows and spreads.

This is a reason for hope when we look at a world that can otherwise seem depressing.

You've probably heard that FIFA has had its leaders suspended. It's being investigated for corruption. Athletics also has a problem - the IAAF is in crisis. Sponsors are pulling out. The latest problem is with tennis; rumours of match-fixing have overshadowed the Australian Open. Sport is corrupt and it's depressing.