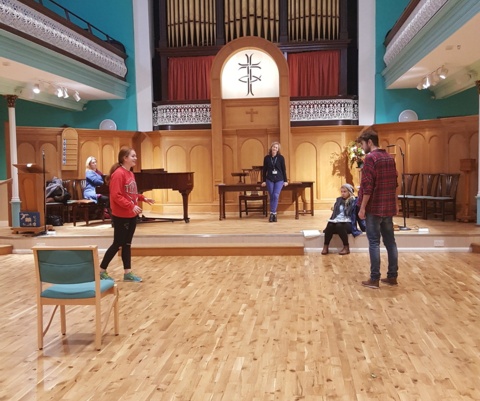 Olivia Keable (L6S) writes ahead of her performance as Mrs Lovett in this years school musical, Sweeney Todd. The shows run from 23rd to the 25th November and tickets are available from ticketsource.co.uk/norwich-school.

I was so nervous auditioning for Sweeney that I was actually shaking, leaving my audition I was happy I had done it and I expected nothing more than pie #11. Then the day of the cast list went up and it said that I was going to play Mrs Lovett, alongside the hugely talented Katy Cary, and I just couldn't believe it. We began to rehearse a few days later and I loved it and have continued to love every second of it. I have been reduced to tears of laughter on numerous occasions by Seph (Sweeney), everyone is brilliantly funny and it is such a great crowd. Miss Ziegler and Miss Rickett are amazing, they keep the rehearsals so upbeat and even if we have to keep going over a scene they never get frustrated, they are so positive and encouraging. The cast are so talented that I watch Katie (Mrs Lovett) and Theo (Sweeney), and even though I've seen the scene before and rehearsed it myself, I get absorbed by it and find myself on edge to find out what happens next. When Seph (Sweeney) and I sing and scheme together about killing and eating people, he's such a powerful actor I find myself thinking maybe it's not such a bad idea, but then I remember I am a vegan! A definite highlight in the rehearsal period for me was getting to waltz with Benedict (Judge Turpin), wait a minute forget rehearsal period it was one of the highlights of my life, I got to waltz with Benedict!!! The ensemble are amazing the way they throw themselves into their roles though they change character it doesn't matter whether it be a lady, a prostitute, a pimp or a lunatic; they go for it. Sarah (beggar woman) does a worryingly good vagabond, with a hint of prostitute who suffers from a chronic case of syphilis. Having a split cast has been fabulous, I've found it really helpful to watch someone else do it, so I can improve by using some of Katie's (Mrs Lovett) elements. I've grown even closer to Theo, Katie and Seph they're amazing people and we now have our own little #Tovett group chat. I can't wait to start rehearsing with the band, they are all so talented and have been rehearsing so hard, and I have also heard exciting rumours of the addition of a gong. We are performing in Epic which is an amazing opportunity as the stage is huge and the set design is absolutely flabbergasting! Everyone involved has been working incredibly hard, it's going to be brilliant! I know I've said amazing a few too many times, but I honestly cannot find the words to explain just how amazing it is to be part of something like this! The musical totally envelopes you and my world is going to be a lot emptier when it is over.