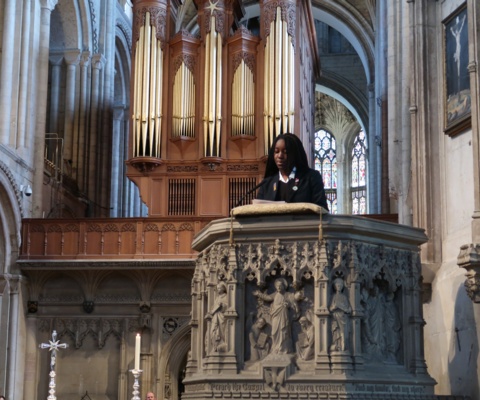 The idea of getting Baroness Lawrence to visit Norwich School was conceived after my GCSE English Spoken Word Assessment. My chosen topic was Multiculturalism and the benefits of having a multicultural education. I then became curious and decided to research more on the topic. Through my research I encountered the story of Stephen Lawrence and the campaigns of the Lawrence family. Fast-forwarding 15 months, after contacting her, we have the privilege of welcoming Baroness Doreen Lawrence to our school today.

On the 22nd April 1993, an 18-year-old black male was brutally murdered in the streets of Eltham, South East London, whilst he waited for a bus with his friend. It was an unprovoked racially motivated attack – he didn’t know his killers and his killers didn’t know him.

Stephen Lawrence was an ambitious, driven and kind young man. He wanted to use his talent for maths, art and design to become an architect; to have a positive impact on his community. Sadly, Stephen’s dreams were not allowed to be realised at the hands of his killers.

The case of Stephen Lawrence is one that changed Modern British society. It highlighted one of the nation’s major problems – racism; Institutional racism in the Metropolitan Police and overt racism in the streets. Stephen’s mother, Baroness Doreen Lawrence, fought tirelessly for truth and justice not only for her son, Stephen but for the British public. Her efforts saw the “double jeopardy” law (where someone cannot be trialled for the same crime twice) abolished in the UK – which eventually allowed the imprisonment of 2 out of 5 of Stephen’s suspects. Furthermore, the case brought about the Macpherson Report – this 350-page document concluded that the investigation into the murder had been “marred by a combination of professional incompetence, institutional racism and a failure of leadership.” The report also recommended 70 measures to be taken in society that were designed to show “zero tolerance” for racism. They included action to not only transform the police’s attitude towards race relations but also to get the NHS, civil service and judiciary among other public bodies to respond and change.

I am glad that I was born at a time where we see an improvement in equality. Incidents such as Stephen Lawrence’s tragic death occur less and less. However, racism is still prevalent in society –whether overt or covert, in plain sight or not, it still exists. We see it in football matches with spectators yelling racial abuse at players, in employment, in everyday life.

Equality comes when we respect one another and our differences. This respect can come from understanding one another’s unique nature and ridding our minds of stereotypes and prejudices. In order to move forward as a society, we need to embrace and celebrate the different cultures we see around us. We also need to be aware of different contributions people have made towards the society we see today – this allows us to appreciate and celebrate one another.

As future leaders, the onus is on every single one of us to educate ourselves AND one another to allow society to develop.

I am sure we have all heard the phrase, “Sticks and stones may break my bones, but words will never hurt me”. I do not entirely agree with this because words can hurt.

People need to understand that their actions can indeed have an effect on other people. Similarly, words can invite hatred and affect people’s behaviour. So, we must all be careful of what we say, what we do and how we say things.

There is no re-set, undo or edit buttons in our lives. Therefore, as individuals we must take responsibility for our actions. Of course, we are free to choose whatever actions we want to take but we are not free from the consequences.

Exposure to different cultures plays a role here. Diversity helps us learn about other cultures by recognising and understanding different perspectives within the world in which we live. It helps dispel negative stereotypes and personal biases about different groups. It also helps us recognise and respect “ways of being” that are not necessarily our own.

As part of my research for this morning I looked at further reasons why diversity is important in the society we live in. I will summarise them in 5 ways.

1.            It brings about a greater productivity because each of us is shaped by our individual experiences. Multiple interpretations and approaches is better than the same thoughts and conclusions.

2.            We become world citizens because we will have regular exposure to cultures, traditions and practices of other people. We will gain a more worldly view and learn new skills on how to communicate and interact with others. It prepares us for a global society.

3.            Our perspectives change when we understand other people’s journeys. Appreciation and gratefulness come into play here.

4.            We embrace people for whom they are not just tolerate. This reduces prejudices that fuel discrimination.

Our society is richer for the contributions of people from different ethnic groups. For example, Queen Phillips of Hainault, the first Black queen of England, who was married to King Edward III in 1328. She encouraged industry by endorsing weaving. She had Flemish weavers immigrate to England and practice their specialised trade in Norwich.

Queen Charlotte who married King George III in 1761, who  was identified as biracial had an impact on the life of Mozart and supported other classical composers. She introduced the Christmas tree to Britain and had the first evergreen in her house in 1800. She also founded orphanages and in 1809 became the patron of London’s General Lying-in hospital- one of GB’s first maternity hospitals.

Olaudah Equiano who was born in the Eboe (Ibo) province of Nigeria, which is my African heritage, was kidnapped and became a slave. He survived that, became involved in the movement to abolish slavery and published his autobiography. He was a renowned member of the ‘Sons of Africa’, a group of 12 Black men who campaigned for the abolition of slavery.

We also have Mary Seacole, a British-Jamaican, who was a pioneering nurse and a businesswoman. She was best known for her brave work in helping the sick and wounded particularly during The Crimean War. AND our very own ‘Godfather of Grime’, Richard Kylea Cowie Jr popularly known as Wiley paved the way for the future of urban music in Britain!

As some of you may know, we have a special event today which has been 15 months in the making. We have the privilege of welcoming our August visitor, Baroness Doreen Lawrence to Norwich for the first time. She will be speaking to some of us throughout the day. Some of us may know her full story and others will be hearing it for the first time. You will hear how an action, a negative one impacted people’s feelings and lives. However, a positive story comes out of it. I am proud to be in a school where everyone is accepted. We should continue to be a community that celebrates and embraces one another and take this culture with us as we go into the wider world.

To conclude, a quotation from Maya Angelou (which I do agree with): “we should all know that diversity makes for a rich tapestry and we must understand that all the threads of the tapestry are equal in value no matter what their colour.”