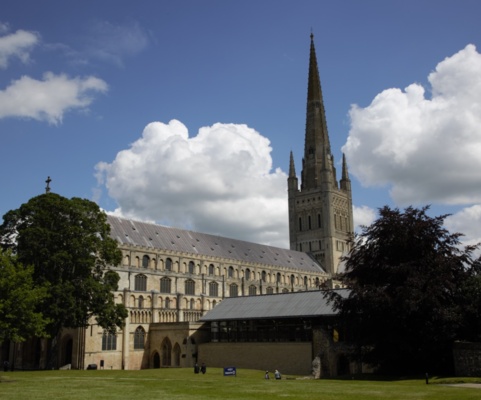 Rev Childs reflects on the biblical idea of "living sacrifice"

“Therefore, I urge you, brothers and sisters, in view of God’s mercy, to offer your bodies as a living sacrifice, holy and pleasing to God – this is your true and proper worship.” Romans 12:1

On the Feast of the presentation of Jesus in the Temple, we remember the journey that Joseph and Mary made with their son to make a sacrifice and keep the Jewish law as new parents.

It is also a point in the church year when we consider the broader idea of offering ourselves to God; and we make sure that duty, devotion and dedication are still there in our own lives, echoing the religious observance of this special family in their visit to the temple. We are reminded again to “offer our bodies as living sacrifices”.

Let’s remember what remarkable words those are at the beginning of Romans 12 – what a striking turn of phrase they would have been in the ears of an early audience, hearing the apostle’s letter read out for the first time.

I say it was a new kind of sacrifice. Better perhaps to call it a fully realised, New Testament idea of sacrifice that had long been brewing in Old Testament times. Take this passage in Micah chapter 6, for example:

With what shall I come before the Lord

and bow down before the exalted God?

Shall I come before him with burnt offerings,

with calves a year old?

Will the Lord be pleased with thousands of rams,

with ten thousand rivers of oil?

What does the Lord require of you?

To act justly and to love mercy

and to walk humbly with your God.

It was always the case – of course it was – that God saw through the outward observance to the human heart. He could always hear the beat of mercy and humility, or the hollow sound of a soul going through the motions. It’s something we can trace back to Genesis, and the altar sacrifices of Cain and Abel – one sacrifice made in a different spirit to the other. People who would worship first have to learn a practice; and then they have to learn that the practice is less important than the spirit in which it is performed.

There’s a story about a boy who is keen to learn more about his faith; and so he starts attending a youth group run by a rather severe vicar. The first week he is told sternly that there is a charge for attending. Every week he must bring the sum of £1 with him; and he must continue to do so until he has graduated from the course. A little non-plussed, the boy asks the vicar: ‘When do I graduate?’

The vicar replies, ‘I will let you know when you have graduated.’

This seems like an odd approach, but the boy decides to go with it – vicars are, after all, slightly funny people.

So the boy faithfully brings his pound every week, and in return he is allowed to sit in church and learn about the love of God, the sacrifice of Jesus on the cross, and what it means to live as a Christian. There is, however, no further talk of ‘graduation’.

Until one day, when the boy is making his way to the weekly meeting, and he comes across a friend in the street. His friend is holding a collecting tin, trying to raise money for a local charity – a charity whose work the boy admires. The boy is faced with a dilemma. He wants to donate to the charity. But the only money he has on him is the £1 that he’s supposed to be taking to the meeting.

He has to decide. It feels like a big moment. Eventually the boy smiles at his friend, reaches into his pocket for his money, and puts it in the tin. Then he continues to the meeting with a sinking feeling in his stomach.

‘Where’s your pound?’ demands the vicar when he arrives.

The boy summons his courage and explains what he has done.

To his surprise, the stern clerical face softens.

‘Congratulations,’ says the vicar. ‘You have just graduated.’

First we learn a practice; then we learn that the practice is less important than the spirit in which it is performed.

One more comment about this verse from Romans 12, “Offer your bodies as a living sacrifice.” The sacrifice we are to offer is our bodies. Our physical, everyday existence. This is not some wistful, remote, unseen, airy idea of sacrifice. This is real-life, solid, embodied sacrifice that we’re talking about. This is sacrifice that works the sinews and reddens the cheeks. This offering is about the purposes that we put our flesh and blood to.

By way of example, here are five things I have done this week:

Classrooms. Milk. Football. Card. Costumes. This is the stuff we deal with every day; we’re called to turn it into worship.

In some of what I did this week, I managed it. I hope my work in classrooms was a kind of worship; there was worship in what I did with my family. I don’t think I managed it with the milk; and the football could go either way…

All of us here have our own list of things we did this week – everyday jobs and activities. But in what spirit did we do those things? Because we are called to offer it all up, everything we do with our minds and our mouths and our hands and our feet, as a living sacrifice.

You may know George Herbert’s poem ‘The Elixir’, which we sing as the hymn ‘Teach me my God and King’. Here’s the bit in the middle about how to sweep a floor to the glory of God:

All may of thee partake

Nothing can be so mean

Which with this tincture, ‘For thy sake’

Will not grow bright and clean.

A servant with this clause

Who sweeps a room, as for thy laws

Makes that and that action fine.

Whatever we have to do this week – whether it is sweeping a room, filling in a form, giving someone a lift, or even clearing up some spilt milk – all these earthly tasks take on a spiritual significance if we do it for the Lord’s sake – as if for him. Then they become more than simple tasks – they become acts of spiritual service, and our lives become an offering. So look at your to-do list for next week in a new light; see it in fact as a worship list.