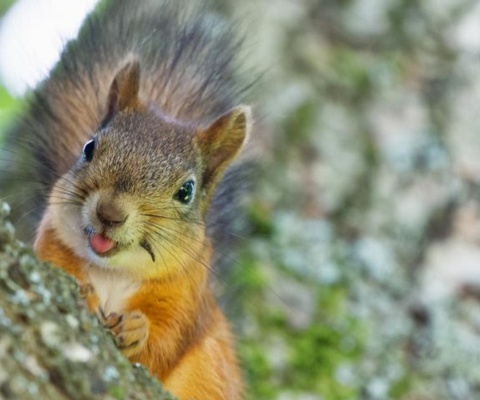 Ms Roper recently spoke in Cathedral assembly about new words that have been added to the Oxford English Dictionary. Read on to find out about what 'buffet squirrel' means...

"I spoke to you last year about how each year the Oxford English Dictionary – or OED – decides on a word of the year. To be considered, the OED seeks a word that encapsulates the activities, thoughts and behaviours of a particular time. As such, it can provide a fascinating insight into who we are today as a society.

Last year’s list included new portmanteau words such as phubbing – snubbing someone on a phone – and hangry – getting bad-tempered and irritable through hunger. There were words that seemed to signify a shift in attitudes around behaviours which were previously seen as the ‘norm’ but were now considered inherently sexist such as ‘mansplaining’. There was a sense too that we as a society were becoming ‘woke’. ‘Woke’ means that you are alert to injustice in society, particularly racism. We started to really notice and appreciate the inequality caused by a sense of ‘white privilege’. And we were waking up to the idea that maybe gender identity is not something which is strictly male or female with the introduction of the word ‘enby’. We had words that held out the hope that the world was becoming a kinder and gentler place. Words such as the Danish word ‘huggah’ meaning to appreciate the moment that you’re in while you’re in it, not later looking at the photos of it on your iPhone; and the Hebrew word ‘firgun’ meaning to derive pleasure from other people’s joy; and ‘lagom’ meaning having just enough, and not wanting more than you really need. The word of the year in 2017 was inspiring and uplifting: ‘youthquake’ - the belief in you and your generation and the impact you could have on shaping the future.

Most of the contenders for last year were, sadly, rather depressing – and indeed the word of 2018 was ‘toxic’. The OED’s data shows that over the last year the word ‘toxic’ has been used in an array of contexts, both in its literal and more metaphorical senses. Literally when paired with the chemical as in the poisoning of a former Russian intelligence officer and his daughter. Or with waste which when burned releases toxic gases which have been identified as one of a number of causes of toxic air. Metaphorically when followed by the environment to indicate a harmful workplace where toxic relationships exist although such relationships can also involve partners, parents, politicians. Words like ‘manfant’ from 2017 look like gentle ribbing alongside the increased use in the term ‘toxic masculinity’ in 2018.

This toxicity can be seen in the increasing use of ‘gaslighting’. The term ‘gaslighting’ came originally from a play of the same name written in 1938, made famous by the subsequent Oscar-winning 1944 film. It means manipulating someone by psychological means so that they accept something which is untrue as being real, even to the point of doubting their own sanity. It is linked to emotional abuse in relationships – toxic ones – but has also been applied to political situations in 2018. Donald Trump features in my assembly last year with his rather lovely new made-up word ‘covfefe’ - this year he is accused of gaslighting the American public with his frequent assertions of everything being ‘fake news’ except what he and his administration say.

Also from the world of politics, but closer to home, we have ‘gammon’. Rather than a pub meal popular in the 1970s, served with pineapple and a fried egg, ‘gammon’ is now a derogatory term for an older middle-class white man whose face becomes bright due to getting so angry when expressing political, typically right wing, opinions. And on a similar food-related theme there is ‘cakeism’, the belief that it is possible to have your cake and eat it. Of course, this is commonly invoked in discussions about Brexit; but it is starting to be used in other areas too. For example, the idea of ‘climate cakeism’ in the insurance industry where you publicly advertise your desire to tackle climate change, whilst continuing to invest in carbon-intensive assets. Incidentally, the Collins Dictionary word of the year 2018 was ‘single-use’, the proliferation of non-recyclable products which are doing untold damage to our natural world.

Last year, the loveliest words that entered the English consciousness were from other countries. So I've turned to Europe in the hope of a counterbalance to the toxicity of the OED selections. The German word of the year for 2018 was Ehrenmann or Ehrenfrau. This is a person you can always count on, someone who is loyal to their family and friends; literally a ‘gentleman’ or ‘lady’ but someone who does something special for others. That seems a good ambition, to be someone who does something special for others. However, my online source suggests it can also be an insult. Perhaps not quite what I am looking for then.

I thought I would turn to the lists of new words for an injection of positivity into this assembly. Because of the rules surrounding how many times a word must be used in certain contexts to make it into the OED, the most recent list has some very familiar words in it or words that relate to technology which frankly go right over my head. Online based dictionaries do not tend to have the same conditions and are far more of the moment. They can be incredibly rude and crude and I did not think I could say most of them in a cathedral, let alone one filled with esteemed colleagues and impressionable young minds. Hidden in these, though, was a term which I rather like. It is the phrase ‘buffet squirrel’. Not only do I like the sound of it, it also refers to something which I thought only occurred in my circle of family and friends - a buffet squirrel is someone who secretly packs away food from a buffet into a bag to eat later or to give to the dog, often accompanied by the words ‘well, we have paid for it’ and or ‘it’ll only go to waste otherwise’. Turns out this is actually a thing, and now we have a name for it. I’m just hoping it doesn’t turn out to be another milkshake duck.

Thank you for listening."