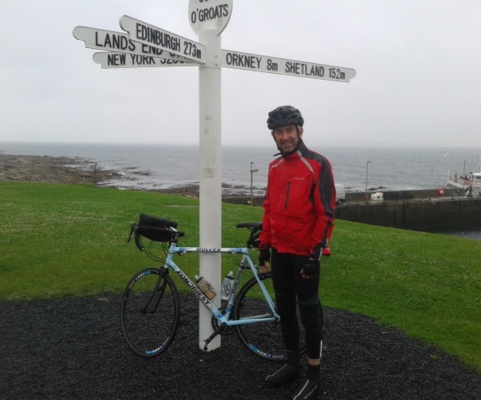 Having turned 49 this year it seemed the perfect moment for a mid-life crisis, so I took the decision to ride the length of Britain to raise money for local Youth Charity the Mancroft Advice Project (MAP) on whose board I sit as a Trustee. MAP does excellent work for young people in this region, providing advice, counselling and support. In the current climate their work is more important than ever as Government cuts to youth services have meant the charitable sector is vital in filling the gap. Having finished the summer term on the Friday, Ronnie Suffling (who had generously agreed to accompany me as support) headed north to Scotland.

The first stage started in the wet and mist of John O'Groats, following the coastline from Wick to Helsmdale. After a couple of testing climbs at the end of the day I was relieved to meet up with Ronnie and the comfort of a warming log fire at the SYHA in Helmsdale.

Helmsdale to Drumnedrochit was a long and in places testing day. The bike developed a faulty with gear changing as we crossed Dornoch Firth. Lucky I had bought along a spare bike! In the afternoon there was a long drag up the hills before dropping down a terrifying 15% descent into Loch Ness and the SYHA at Drumnedrochit.

The most spectacular day so far followed as I cycled the length of Loch Ness and the Caledonian canal before climbing to a fantastic view of Ben Nevis at the Commando Memorial. The descent takes you through Fort William and eventually onto the awesome mountains of Glencoe. If there is a more dramatic cycle ride in the UK I would like to see it. It was a fantastic 70 mile day.

In the morning the weather was very poor as I contemplated the 85 mile ride over the pass at Glencoe and on to Glasgow. The initial climb in heavy rain offered a very testing prospect and not for the last time on the trip I contemplated whether I could do it. With Ronnie's encouragement and essential roadside support (including several layers of clothing as the conditions changed throughout the day) I managed to scale the pass and was treated to a long descent into Loch Lomand and eventually a sunny Glasgow after 9 hours on the road. The long day was offset by the fantastic central and luxurious accommodations at Glasgow's excellent Youth Hostel.

Glasgow to Dunfries, was a leg most memorable for poor road surfaces and more wind and rain before passing through a section that looked remarkably like a giant train set, with green hills from top to bottom. The following day saw me pass from Scotland to North Cumbria, via Gretna. The weather immediately improved and the day was spent cycling in beautifully dry stone walled hills with a stunning view of the Lake District to the South West and this day was another, unexpected highlight of the trip.

I had arranged to meet my son in Malham where he was on a UCL archaeological dig. The journey was memorable for the heavy rain and unrelenting hills, but the spectacular setting of the Youth Hostel near Malham Cove was a welcome reward, as was the meal we were treated to by the students of UCL.

The first and only puncture of the trip delayed my departure slightly to Warrington and the next few days were spent travelling along the Welsh border, via the fascinating and historic Iron Bridge, before passing through Cheltenham eventually arriving in a sunny and vibrant Bath. Another wonderful Youth Hostel allowed me a night's recovery whilst saying farewell to Ronnie and contemplating the last three days with the panniers and more limited support.

The journey from Bath to Tiverton was eased by the wonderful support of Fran Ellington and her husband Pete, who met me in Glastonbury and provided me with provisions and the offer of carrying my panniers to Tiverton. The views from the Mendips across the Somerset levels to Glastonbury Tor were spectacular and we enjoyed a great evening meal by the river Ex which really encouraged me to think that the final testing days in Devon and Cornwall could be conquered.

The next two days proved some of the most testing of the trip. Perhaps fatigue played its part but the unrelenting hills (or 'upsee downsees' as I christened them) were energy sapping. As I skirted Dartmoor and descended towards the south coast the endless river valleys made for some exhilarating and fast descents (reaching 40 miles an hour in places) but were followed by equally testing climbs. I arrived at Liskeard (after another 9 hour day in the saddle) exhausted but galvanised for the final 70 miles to Land's End in the morning. Travelling in misty and wet conditions for most of the morning, I made it to a sunny Truro to rendezvous with Mr Bateman for lunch next to the city's beautiful cathedral. An exchange of panniers meant I could enjoy the final afternoon travelling to Penzance, now in full sunshine, and the last section to Land's End, where I was greeted by Mr Bateman and ONs Sam and Matthew Plater! It was the perfect ending to a thoroughly enjoyable 900 mile two week trip.

The trip would not have been possible without the fantastic support of Ronnie Suffling, who was always on hand to support, whether it be food or running bike repairs and was great company throughout which kept my spirts high even in the most testing conditions. Mr Williams kindly allowed us to use his excellent VW pick-up truck which was the perfect support vehicle and the school generously donated petrol for the whole journey which I am very grateful for. The wonderful support of Fran and Pete Ellington as well as Mr Bateman in the west country was also a highlight. The trip raised £1,325 for the Mancroft Advice Project (MAP) and I am very grateful to all those who so generously sponsored me.