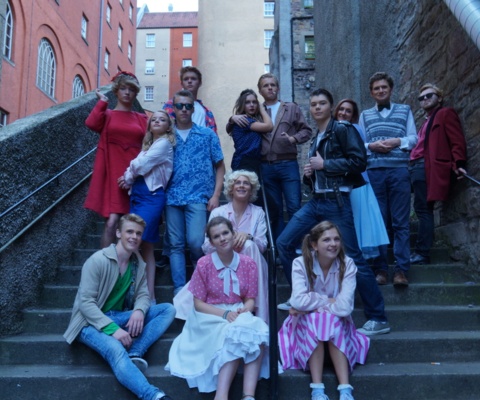 Team player, individual or both? Welcome or welcome back to the Cathedral for what promises to be another action-packed year at Norwich School. Whatever you have been doing in the last few months, I am sure you agree that it is good now to be in this wonderful building.

I had the pleasure over the summer of visiting the Edinburgh Festival to see the two Norwich School shows there. It is now the third year we have taken productions to the Festival, the first time we have taken two in the same year: you will be pleased to hear that both Muswell Hill and Grease were accomplished shows which drew in excellent audiences, no mean feat for school pupils at the world's largest Arts Festival.

Those of you who have been to the Festival will know that one of the most effective ways of advertising your show is to attempt to persuade passers-by on the Royal Mile, one of the city's busiest streets, to see you in action. It is one of the most distinctive experiences of the Festival because the street is heaving with people from morning until dusk; you cannot walk straight from one end to the other, let alone find space to perform one of your songs so that people will be tempted to visit you later. Yet that is what happens; everything is on offer from one-person comedy shows to opera, from new writing to Greek tragedy and with everything between.

There is at once a feeling of togetherness for both performers and audience members on the Royal Mile, of being part of the Festival, while at the same time it is a mass of individuality and competitiveness to get yourself noticed. It strikes me that this balance bears comparison with a school community: we feel that we are together as a community, certainly on occasions such as this, yet we are also full of individuals with different goals and ambitions. Each of us, pupils and teachers, will have our own particular aspirations for the year ahead and I suspect that there is this morning optimism mixed with nervousness about how things will turn out. Our reading today seeks to offer reassurance at this time: "May he grant you your heart's desire and fulfill all your plans!"

Yet there is potentially a tension between the school's desire for you to fit into our community ethos and for each of you to develop your individual talents. Human beings are social and tend to want to get along, but entrepreneurs often cite the strength of being different and challenging the status quo: Richard Branson talked recently of the importance of having what he called "disruptive talent" in a company, while Michael Ashcroft expressed dislike for the word normal:  he says in his autobiography, "I am not interested in what is normal: if it can be done in a better, more efficient way then I want to do it that way".

Those of you who have been here for a while may recall that I am an admirer of Dave Brailsford, the man who oversaw British Track Cycling's rise to dominance over two Olympics and who is now in charge of the Team Sky road cycling team which this year claimed its third Tour de France win in four years. Every day of the Tour offers extreme examples of extraordinary individual feats within a team context and Brailsford, in offering an explanation for Team Sky's success and Chris Froome's latest win, made some comments which perhaps offer a way through this balance between community conformity and individual spark. He said, "I am convinced that successful teams emerge from emotionally robust cultures". An emotionally robust culture: he is talking of an honesty and a resilience which underpins the best communities. Yet it is more subtle than simply standing up for yourself and saying what you think; that could lead to a ruthless, cold-hearted atmosphere, too full of Branson's disruptive talent.

Brailsford moves on to talk about identifying winning behaviours which create this emotionally robust culture: not moaning, seeking out marginal gains, seeking and giving constructive feedback, looking to learn, actively listening. However, it is the last of his winning behaviours which most caught my eye: proactively solving problems for team-mates. He explains, "I can't tell you how important that last one is [proactively solving problems for team-mates]. People say: 'You could have helped me'. The response is invariably: 'If you'd asked, I would have'. That isn't enough. They shouldn't need to ask. Proactivity is the difference between a good and a great team."

It is the ability to think of those around you and how you can help them before they even ask for it. That, for Brailsford, is at the root of a culture which allows its members to retain their individual identity while also contributing to a cohesive, effective whole. I think it is a valuable quality indeed and I hope that you will reflect on how you might shape yourself to be a proactively positive contributor to Norwich School as you plan for the year ahead. We wish you to strike that balance of being thriving individuals within our emotionally robust community.

We finish where we started, in Edinburgh, and here are some home truths from the Festival one-liner competition:

It is good to gather as a community once again and I hope you all have an excellent term.