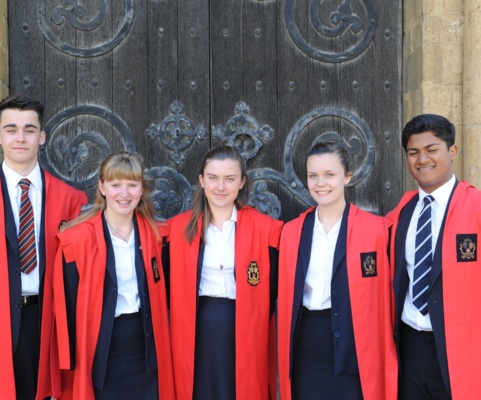 It is appropriate on our final day together in the 2014/15 year that we acknowledge the privileges we are fortunate to have. So, we are going to start by pausing to consider our surroundings, the things which have gone on here, which you have witnessed. We will also show awareness of others who are less fortunate than ourselves and will include the national minute's silence for those affected by the recent Tunisia beach terrorist attack in Sousse; I ask you to think particularly of those families affected.

Thank you.  One of the things we use for reflection in both good and challenging times is music. Alex Little is going to play Adagio in E Major by Frank Bridge.

Thank you, Alex. I hope that piece has given you time to reflect on the year you have had personally, both highs and lows, and to think of others. All of us will have had the chance during this academic year to work hard for and enjoy success while also being resilient in the face of adversity and setbacks. This morning's reading [1 Peter 1: 3-9] talks both of joy and of the endurance of suffering; life will throw up both good and bad things and we need to have the skills to deal with the associated range of emotions. I am convinced that we at Norwich School are helped in coping with the highs and lows of life by having the chance to be in and around this building. Because of its scale and age, it helps us to keep things in perspective, aware that others have drawn strength from their surroundings before us.

So I ask you: who is Edward Stanley? What was he like? Was he a morning person? What did he like to do with a spare hour? Did he sing well in Cathedral? These questions have been in my mind for a while; you may be thinking more, "What does any of this have to do with final assembly?" In fact, you all have a connection with him and have been near him several times during your Norwich School careers. Any offers? Clue - you need to look down rather than up. It is Edward Stanley, Bishop of Norwich at the beginning of the 19th century, whose memorial stone lies in the middle of the Nave aisle and whose presence is recorded here by hundreds of feet every day.

Similarly, Thomas Dalton and Humphrey Prideaux can be found over by the dais, and Thomas Tawell, John Willink and Alan Webster can be found on the walls in front of some of our leavers sitting in the south side of the Cathedral. So you do know something of Edward Stanley and these other people; they are part of the fabric of this awe-inspiring Cathedral church where we have the enormous privilege of being able to spend time as a whole community every day during term time. We are part of a community at the present time, but also one which has been established over time. This does not contradict the challenge presented earlier in the week during Mr Campbell's excellent address and sound performance to live in the moment as we look on things afresh, both here and elsewhere. For me, such moments are heightened by the sense of adding to an ancient archive of comparable experiences.

All this points to the complex relationship of human beings with buildings they inhabit. Spaces such as this see a swell in numbers at times of crisis such as that for which we held a minute's silence earlier. You will be aware of current international outrage at IS' destruction of ancient monument sites. It is perceived to be more than the breaking up of stones or walls, but an assault on a collective human heritage which transcends time and religion.

Yet it is important to remember that our relationship contains much joy as well as comfort and I am sure each of you will have your favourite occasions in here. You will not be surprised to know that the leavers have included many happy references to being in the Cathedral in their yearbook:

Singing the starred verse in the old hymn book

Mr Tivey saying, "And it was gooooood"

As for object they would most like to take from Norwich School, let us just say that if they were to have their way, we would not have much of a Cathedral left for next year.

I am sure that our leavers will be reflecting at this time on their various connections with their surroundings. After the singing of Jerusalem, you will take your hymn book, a symbol of your connection with the community's life here in the Cathedral, and process with your friends through the west doors to take up your place in wider society. You have certainly made your contribution to this building and what it stands for, both in terms of the Norwich School community and the wider world. You have been a notably friendly and committed year-group and we are proud to have had your positive influence. I know that you will treasure memories of the building and the friendships you forged around it. You leave with good wishes from us all and a request to keep us informed of your ongoing journeys.