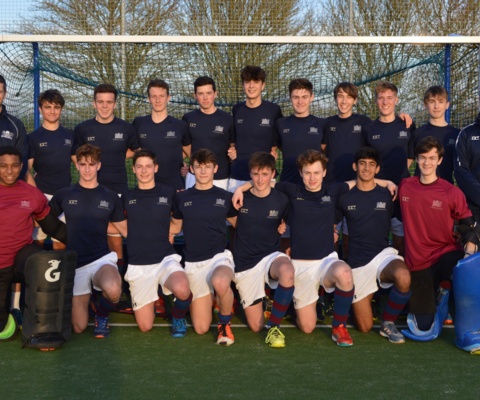 The Norwich School Boys 1st XI Hockey team are competing at the Notts Sport Boys U18 Schools Tier 1 Championship Finals on 1st May 2019, as one of the four teams in the country to have made it through to the finals.

Norwich School What is the role of the Leadership team?

Ben Nkrumah (U6 Captain) "The leadership team is a platform for the discussion of ideas from the team and from the teacher. It is critical to the coordination of the squad whether that be in a training session or off the pitch. As a leadership team, we try to lead by example, are a support network for the squad and do our best to help support them."

Toby Culling (U6) "To get a group of people involved in decisions as to how we want to play on and how we want to prepare off the field. It’s a bit like a democracy but where the whole team can stream ideas through their teammates into the leadership group."

Norwich School Who has improved the most amongst your teammates this year?

Ben Nkrumah (U6 Captain) "George Harrad. During pre-season and the early stages of the season, he was a player who had not fully adapted to life in the first team but as the season has progressed he has grown into his role and is an integral part of what makes this first team tick."

Ed Murphy (U6) "George Harrad. He has transitioned from his role as a striker in the 2nd team to be an integral part of the team as a reliable centre back."

Norwich School What is the key to your success?

George Wright (L6) "Key to success is trusting the process and the principles. Along with the drive and hard work and winning your races."

Raunaq Rai (L6) "As a first team, our three principles are Drive; to work harder and more efficiently than other teams, Detail; to make sure we put work in, not just in training sessions, but also outside and Badge; to know that we represent the school."

Norwich School What has been your most memorable game this year and why?

Ben Nkrumah (U6 Captain) "Reed’s. Even though the result didn’t go our way, in the end, the high quality of hockey we played and the drive we showed was incredible to be a part of. It showed that we are not here to make up the numbers but compete with and match some of the top sides in the country."

Toby Culling (U6) "7-2-win vs Langley Park. Everyone showed up and of course Ed Murphy scoring goal of the season."

George Wright (L6) "The quarter-final vs Oakham was very memorable due to it being such a big occasion and for such a good result. I won’t ever forget going over to our parents after the game and celebrating."

Norwich School How have you found the balance between being a 1st XI player and academic studies?

Toby Culling (U6) "Hockey gives me a break from academics. It’s less about balancing and more about finding time for hockey to put me in the best mental state for work."

Harry Paterson (U6) "The balance isn’t as laborious as expected, as long as one is proactive about their learning and communication with teachers. Having club and other hockey training throughout the week has also helped me to develop organisational skills to avoid these obstacles and make better use of my free time."

Raunaq Rai (L6) "For me, there hasn’t been a clash between studies and being a first team player. On busy weeks with multiple matches and training sessions, I usually write down a plan for what work I have to do and in what time I have to do it."

Norwich School How many sports have you represented the school in over your time here?

Raunaq Rai (L6) "Up until U15s, I represented the school in rugby, hockey and cricket. As soon as I was given the choice to specialise in a sport, I chose to specialise in hockey. This meant I could pursue hockey outside of school with a club."

George Wright (L6) "I have represented 1st and 2nd team rugby this year, 1st hockey for the last 2 years and 1st tennis team. I also played cricket until the U15s."

Harry Paterson (U6) "I have represented the school in cricket, rugby and football, besides hockey, and have enjoyed these matches due to the competitive nature."

Norwich School What has hockey taught you?

Ben Nkrumah (U6 Captain) "Hockey has taught me the importance of communication and the importance of living in the moment and not getting stuck in a mistake or past moment as it can lead to a vicious cycle of mistakes."

Raunaq Rai (L6) "How good it feels to be among people with the same goal as you all helping each other achieve it."

George Wright (L6) "Hockey has taught me respect for senior players and staff and how to communicate in a team environment. It has also taught me that hard work does pay off and it’s not always the most naturally gifted players who succeed."

Harry Paterson (U6) "Most importantly, enjoy playing and always believe in yourself, no matter what other people may say and no matter what doubts you may have."

Norwich School Why would you encourage others to play hockey?

Raunaq Rai (L6) "I would encourage others to play hockey because it is a game where everyone is relied upon to do their job, which relies on trust and support within the team. Because of this, team culture is positive and fun where players spend time together not only within the team but also at social gatherings which range from having lunch together at school or going to play paintball.

George Wright (L6) "Hockey is a team game which is incredibly fast-paced and exciting. It’s good to improve fitness levels and a good game to create friends with."