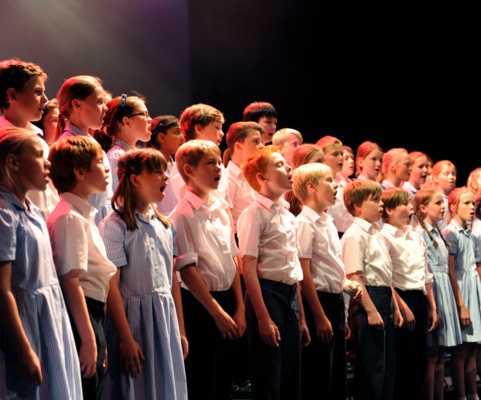 By Kate Holdsworth and Rachel Dennison

A night of dance, comedy, drama and music by Norwich School pupils at the Theatre Royal.

Oliver Binks and Michael Ni'man were the comedic comperes of the evening on Thursday, July 2nd. The evening kicked off with a performance by the senior percussion group, the first of several instrumental acts. Later, Catherine Dixon and Alex Little (Norfolk Young Musician of the Year 2015) gave a brilliant piano duet of Stravinsky's 'Rite of Spring'. Additionally, the Senior Jazz Band filled the theatre with upbeat sounds during Trumpet Blues & Cantabile.

The Jazz Band also accompanied a dance performance to 'Uptown Funk', involving almost 60 dancers on stage. A highlight of the evening was a graceful ballet duet to 'Yours' by Ella Henderson, choreographed and performed by Alice Whitmore and Jemima Sanders.

Three choirs sung at the Gala, including the Pop Choir and Lower Four Choir. The two soloists from the Lower School Chamber Choir, Abigail Flatt and Alex Dixon, wowed the audience with their professional sounding voices.

Morgan Corby, a pupil who has just finished his GCSEs, had the audience crying with laughter with his comedy performance. Also, A Level Drama and Theatre Studies students performed 'Kindertransport', a piece about a Jewish girl sent away from Germany just before the Second World War.

These are just some of the variety of acts on the night. There was something for everyone at this wonderful display of young people's talent.