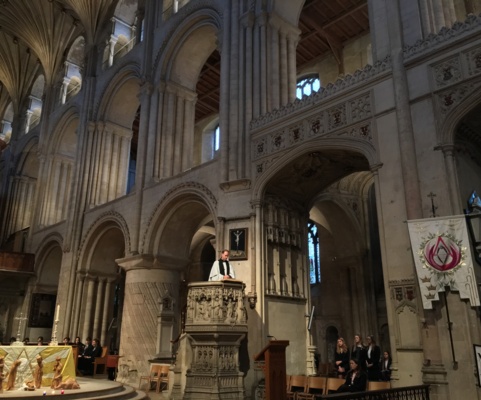 Circles of friendship by Mr Child

As Jesus was walking beside the Sea of Galilee, he saw two brothers, Simon called Peter and his brother Andrew. They were casting a net into the lake, for they were fishermen.  ‘Come, follow me,’ Jesus said, ‘and I will send you out to fish for people.’ At once they left their nets and followed him.

Going on from there, he saw two other brothers, James son of Zebedee and his brother John. They were in a boat with their father Zebedee, preparing their nets. Jesus called them, and immediately they left the boat and their father and followed him.

That reading is the account in Matthew’s gospel of the calling of the first disciples.

As Jesus was walking beside the Sea of Galilee, he saw two brothers, Simon and Andrew. ‘Come, follow me,’ Jesus said. At once they left their nets and followed him.

It’s all a bit quick. And yet I think there are some things going on here that can help us with our own friendships.

Thinking about friendship sets off different reactions in each of us. For some, it’s a pleasing thing to talk about, because friendship is the best thing about school and the thing we miss most when we’re away from here. Other people will feel more anxious, because unsettling thoughts may cross our minds about whether we have enough friends, or real friends, or the friends we actually want; whether we have time for our friends, and so on. Whoever we are, these things make a big difference to us, and we want to do friendship as well as we can.

Here are a couple of home truths about friendship. Firstly, friendships change as people get older. You know this already. There are people you were close to when you were younger who you don’t spend so much time with now. It can feel odd; but it’s quite normal, and it continues through life. The friends in a big wedding photograph are different to the friends in a silver wedding anniversary photograph. Equally, and remarkably, there are a few people in both photographs, just as there may be a few people you are still close to from when you were much younger. These lasting friendships are something to be thankful for.

You may not even have guessed that these people would be your friends at all. A quick show of hands – if you can remember meeting someone for the first time who is now a good friend, but back then seemed (frankly) a bit weird, put your hand up…

So maybe Jesus choosing his disciples quickly isn’t so strange. All kinds of people can become our friends; so it’s better to see if we can get on with the people around us than it is to conduct a lengthy interview process to find suitable candidates worthy of our acquaintance.

Secondly, everyone has different circles of friends. Roughly three circles in fact – people you know, people you know quite well, and people you know really well. A piece of research in 2016 concluded that at any one time there’s a maximum of five people in that smallest, closest circle, because this sort of friendship takes time and commitment. So if you’ve told everyone on your social media account they are your BFF, you’re not being completely realistic.

Again, Jesus’ decision to have a smaller group of close friends around him starts to make more sense. There are particular people with whom he makes an investment of time and familiarity; the quality of his friendships come before the quantity of them.

Crucially, though, Jesus’ close group of friends is not a closed circle. It doesn’t shut him off from other people. The next thing that happens in Matthew’s gospel after the calling of the disciples is this:

Jesus didn’t have an established group of people around him instead of touching the lives of many more people; the two things went together. Here’s another lesson for us, then: that we can have both the smaller and the wider groups of friends in our lives: they go together.

For me, the variety of relationships is one of my favourite things about our school community. Something else for you to do: please shake hands with the 3 people that are closest to you.

Some of you will only have shaken hands with people in your tutor group. But one or two of you will have shaken hands with someone a fair bit older or younger, perhaps someone you’ve never actually spoken to (although you may have heard their name mentioned in connection with something interesting or impressive). This is a great thing about Norwich School – the way a chess player has a lesson with a survival expert; or a sixth former learns something from a fourth former in their Mentor Family; or a historian has a chat on the gate with a former Ukrainian tank commander. Learn to love being part of this melting pot if you haven’t already. When we say Norwich School is a friendly place, surely this is what we mean – not just that we smile at each other now and again.

I hope that some of my thoughts – and the Bible’s thoughts – are helpful as we go into this new day and continue our friendships.