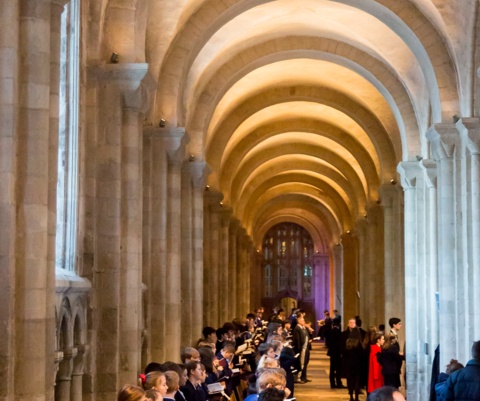 I spoke in the opening assembly of the term about the importance of literacy and language but I am conscious that this is my first chance to talk to the whole school in 2019. It is good to have everybody together again and I should like to take the opportunity to give the whole community something to think about at the start of this new year.

The idea is stimulated by the excellent address in the Blake last week by Professor David Runciman, Professor of Politics at Cambridge University. He started his address by challenging the audience to come up with one question which might enable you to work out which way someone had voted in the Brexit referendum if you did not know anything about them in advance and could not use any non-verbal cues (and no, your question could not be “which way did you vote in the referendum?”). The point he was making was that traditional categories such as political party allegiance, wealth, place of birth or residence were unhelpful. Two categories you might get which would be helpful indicators were age and education; the older you were, the more likely you were to vote Leave; the higher the level of your formal qualifications, the more likely you were to vote Remain. However, the question which had a stronger indicator than either certainly surprised me. It was “Would you support the reintroduction of the death penalty?” The correlation of Remain for a no answer and Leave for a yes answer was over 70%.

I do not recount the story to make political points about Brexit, then or now, or indeed capital punishment. The latter obviously is not policy in this country but it certainly exists around the world. Regarding Brexit, Norwich School families inevitably will have voted on each side of the referendum and I am going to talk shortly about the importance of respect in debate. The point Professor Runciman made is that social and cultural attitudes were a pivotal factor in the Brexit process and continue to be so in contemporary politics. I harness this striking example to say that we must use the special community we have here to talk meaningfully about big issues.

Now that does not mean that we all need to agree about everything. When the Archbishop of Canterbury came to Norwich before Christmas, he talked about reconciliation because it has become an area of expertise for him during his ministry. He talked about the power of “disagreeing well”, based on a fundamental respect for the other person.

I like that idea of “disagreeing well”. It gives us the confidence to speak up when someone says or does something with which we are uncomfortable but to do so in a respectful and calm manner, whether in written or oral communication.

And this is not to preach a glib, unquestioning “tyranny of tolerance” with which your generation can sometimes be afflicted. I do not apologise for associating tolerance with the loving, compassionate community to which we aspire at Norwich School. However, this should not exclude a debate within a range of positions on any given topic. There are so many issues for your generation to get to grips with: obvious political issues such as Brexit, Donald Trump and prospects for the global economy. However, there are topics on which there should be discussion within the Norwich School pupil community: let us take the issue of gender as an example. The 21st century is often thought to be the century of the woman, but what does that mean for girls and boys in our co-educational community? How should we educate and regulate ourselves about the issue of consent? How should we best approach issues of gender and sexual orientation? How should society legislate regarding shared parental leave to encourage stronger paternal role models? Surely our co-educational environment is well-placed to have a respectful, sincere debate and I hope that we could come up with comparable lists of discussion topics for issues such as race, climate change and social mobility.

I don’t know what your answers to the big questions will be but I hope you will be active in thinking about them. I want these words provoke you to reflect on your own view and test them out in discussion with peers, parents, teachers and others. Get involved and do not be afraid to disagree; just make sure that you disagree well.