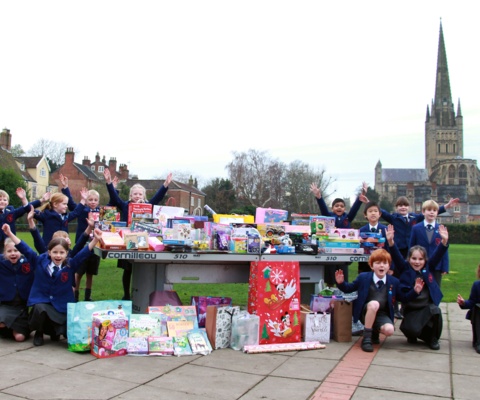 The supporting of charities forms an important feature of every term in the Lower School. The School Council decides which charities will be supported during the term and discusses with staff the events we will be holding.

There is a cake sale each term organised by one of the Houses and this is often run in conjunction with a non-uniform or dressing-up day. Our major charity event of the year is always the Christmas Fair. This is run entirely by pupils, although parents often help to man the stalls on the day!

In the last year we have raised over £4000 for different causes. An important part of fund-raising involves a visit by the chosen charity to explain to pupils how the money they raised will be used.

Over recent years we have undertaken the following charity events:

Our Upper Three pupils are also encouraged to undertake the Lower School Service Award, with one part of the award focusing on carrying out some Community Service in their local area. Recently this has included pupils singing and performing at local nursing homes, collecting litter, volunteering at nursing homes and checking jigsaw puzzles for charity shops!