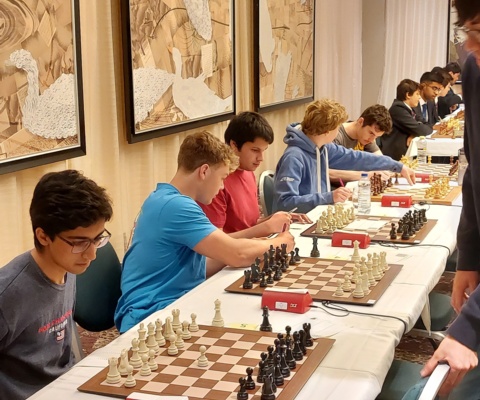 On Thursday 30 June and Friday 1 July, the Chess team took part in the National Schools Finals in Stratford-Upon-Avon. Of the 19 schools from across the country, we were ranked 19th and were pleased to be there representing East Anglia having qualified by beating Woodbridge, Westcliff High and Brentwood earlier in the year.

Team Captain, William Blythe-Bartram, had a very difficult time on Board 1 with all his opponents graded higher than him, including two Candidate Masters. Despite this, he held his own in every match and held two of his opponents to draws. The team got off to a winning start with a 4-2 victory in round 1, thanks to wins from George Taylor, Jay Ambadkar and Jack Yaxley. In round 2 we were outplayed by St. Olaves, although Jack drew his endgame and George won again. Round 3 was against Nottingham High School and a win on Board 2 from Arthur Dannatt helped us tie the match 3-3. After six hours of chess we ended the first day mid-table.

The second day began with a match against Eton College. Wins from Karthik Prabhu, as well as Jack and George meant we drew the match 3-3. The final round was against Bolton High School. Will played out a tense draw on Board 1, Arthur and Karthik both achieved their second wins and George Taylor won his fifth game in a row, completing a 100% record for the competition. As a result we beat Bolton and finished the competition in 6th place overall! This was an outstanding achievement that the six players should be very proud of.