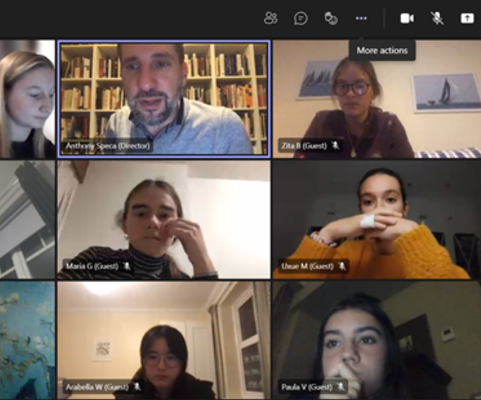 Last weekend, six of our members took part in the second Online Model Arctic Council (OMAC) conference, alongside 14 other pupils from three other schools in the UK.

Representing Finland was May Maclennan, representing the Russian Association of Indigenous Peoples of the North were Philippa Garrod and Florence Wilks, and representing the Saami Council were Bibi Boyce and Octavia Udy.  Bibi, Flossy and Pippa, along with Dora Lee, Ann Kalu and Arabella Wang also took part in the second OMAC Delegate Training round this past November, which involved over 30 pupils from schools in India, Indonesia, Spain and the UK.

At OMAC 2, delegates negotiated, jointly drafted and adopted a declaration on the issue of the transmission of Indigenous Knowledge from elders to youth.  Delegates benefitted from the opportunity to reflect on this issue, and on the progress of their negotiations, with Prof Ketil Lenert Hansen of the University of Tromsø, a respected expert on the mental and social health of Indigenous Saami children and youth, and himself an Indigenous Saami knowledge-holder from a reindeer-herding family.  Their work was also recognised by the real Ambassador of Finland to the Arctic Council, Petteri Vuorimäki!  He saw and re-tweeted a tweet originally posted by the OMAC Secretariat about the declaration in progress, saying that here were future Arctic Ambassadors in the making!  High praise indeed -- congratulations to our delegates!