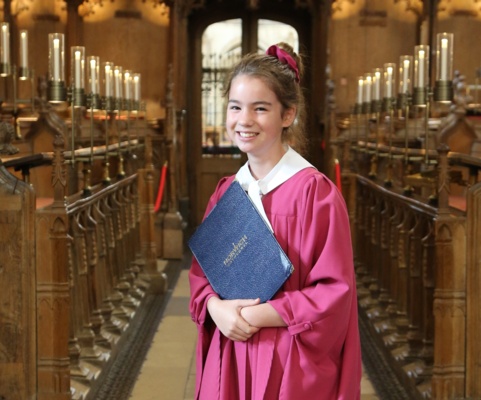 M5 pupil Alice Platten is celebrating reaching the semi-finals of the prestigious BBC Young Chorister of the Year competition.

Fourteen-year-old Alice is one of just 10 choristers across the country in the running for the coveted accolade after impressing judges with her audition performances of Ex ore innocentium by John Ireland and The Little Road to Bethlehem by Michael Head.

Alice will compete in the semi-finals in September and as part of this she will have the chance to enjoy a masterclass with singing superstars Katherine Jenkins and Aled Jones. The top 10 boys and girls will then sing in a semi-final and six singers will go through to a televised final later that afternoon.

The competition, which is run jointly by BBC Radio 2 and Songs of Praise, will be broadcast on both radio and television later in the year.

Alice is not the only Norwich School singer to have had extraordinary success in this incredibly prestigious national competition. Alice is the third pupil from Norwich School to make the top five girls in four years.

As well as being a member of the Cathedral Girls’ Choir, Alice sings for the school in both the Chapel Choir and the school’s acapella choir, GForce. She also plays the violin and piano and is about to start her GCSE music course.

Alice said: “I was really shocked to get the call from the BBC. I am really looking forward to following in the footsteps of previous Norwich choristers and being involved in the programme, especially being able to meet Katherine Jenkins with the other choristers for a masterclass.”

Ashley Grote, Norwich Cathedral’s Master of Music, said everyone at the Cathedral was incredibly proud of Alice. “For Alice to have been selected as one of the final five girls in this year’s BBC Young Chorister of the Year is a tremendous achievement,” he said. “A number of Norwich choristers submitted video entries which, without exception, were all excellent, but Alice’s entry particularly stood out and I am not surprised the judges were impressed by her. She is a natural performer who is not only a very accomplished singer for her age, but also an engaging performer who smiles at her audience! I am delighted that Norwich will be represented in the final stages of this prestigious competition.”