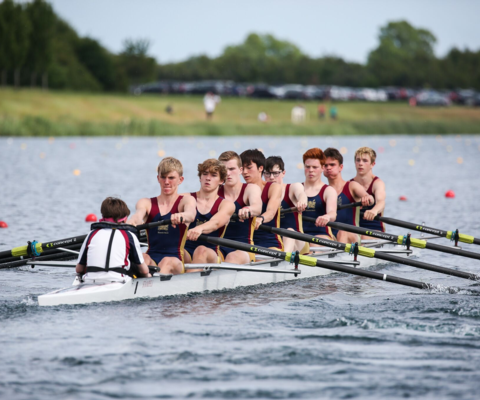 Norwich School Rowing Teams had some fantastic success at the National Schools Regatta this month. Read Head of Rowing Mr Barrell's report of the weekend here:

Last weekend the School’s boat club competed on the National stage on the Olympic Rowing lake at Eton, Dorney.  Friday’s events saw the L5 race J14 girls’ quads and boys’ octopuls.  The girls boat looked strong and focused in their time trial and came 21st from a competitive field of 41 boats.  The boys’ octo started off well but after 1000m struggled to keep up cohesiveness and lost boat speed.

On Saturday it was the turn of the 1st and 2nd M5 eights the U5 eight and four and the Senior first eight.

The J16s performed well in the Championship 8+ category and just missed out on a top 12 place from 19 boats.   The J16 4+ rowed well in their semi-finals and holding off Great Marlow School throughout the race they achieved a 3rd place- in the B final.

The first eight had to place in the top 16 boats from 28 boats to secure a place in the semi-finals and with mainly Championship crews filling the first 12 slots our boys managed 15th and thus progressing to the semi-finals.  Close racing in the semi placed us in the B final which drew us next to Pangbourne College, Latymer, Abingdon, Hampton, King’s Chester, and St Georges College.  From an unusually slow start the 1st VIII demonstrated great resolve as the race progressed and started to claw back places; first over-taking St George’s College then Latymer Upper and finally drawing level with Hampton School on the finish line to gain a fourth place in 1st Eights.  Another 112m (Henley is in 1month time being 2112m) and I’m sure that Pangbourne would have succumbed too! The eight finished the day with heads held high and a real positive vibe having equaled the School’s best-ever result.

The M5 squad raced in two J15 eights in the ‘Championship’ and ‘Second Eights’ categories. The second eight raced well in the time trial to come 2nd to St Paul’s School in a field of 21 crews putting them through to the semis as one of the favourites.  The semi-final saw them race against Eton, King’s College, Bedford, Latymer Upper and St George’s College.  The race was closely fought against Eton for 1st place and remaining down slightly up to 500m to go  Seb Gotto brought the stroke rate up to sneak a canvas win over the Eton Boys.

The final line up was against St Paul’s, Radley, Eton, King’s College and Winsor Boys.  In an outstanding display of real guts and determination the boys were level with four other boats, in silver medal position, for much of the race.  However, with composure and an increase in power every stroke they ‘eeked’ out a half a length lead over the pack to win the Silver Medal.  An amazing effort and a very well-deserved podium finish.

The J15 1st VIII, following their success at Bedford Regatta, were one of the favourites in the field of 24 boats on Saturday.  They were the first race of the day at 0800 and looking composed and powerful; they won their time trial by 2 seconds.   The semi-final was not going to be a walk over with St Paul's and Eton the major adversaries.   A good start meant Norwich School were 2nd to 500m just behind Eton but their rhythm was strong and their length good and they had pushed their bows in front by 1000m.  The 2nd 1000m gradually saw our boys increase the lead to over a length and a half, equaling the course record and more importantly getting their place in the final.

With two hours before the final race, the usual recovery food was devoured eagerly and tired limbs were rested.  In what seemed no time at all Mr Daalhuizen conducted a pre-race warm-up, and Mr Barrell offered the motivation and race plan before the boat was floated for the final time.

The final race meant the boys lined up with KCS Wimbledon, St Paul's, Eton, Radley and Windsor Boys, all hungry for the coveted prize.  With last year’s J14 octopul silver medal placing still stinging the wounds the M5 boys pounded off the start and got their bows in front by 250m.  Edging further out to a length by 1000m KCS started to put in a challenge and took their rate up, they started to edge back.   St Pauls, Eton and Radley were battling it out for Bronze and posed no threat, but KCS started to inch back into our lead.  Toby Finch calmly called a push at 500m to go and Sonny Cooper led his crew into a final rate change and took victory by 1 length and smashed the course record by 5s (which has stood since 1999).  The Founders Cup for J15 Championship 8’s was won by an extraordinary crew on a very memorable day.  Well done to both J15 crews for an exceptional set of results. 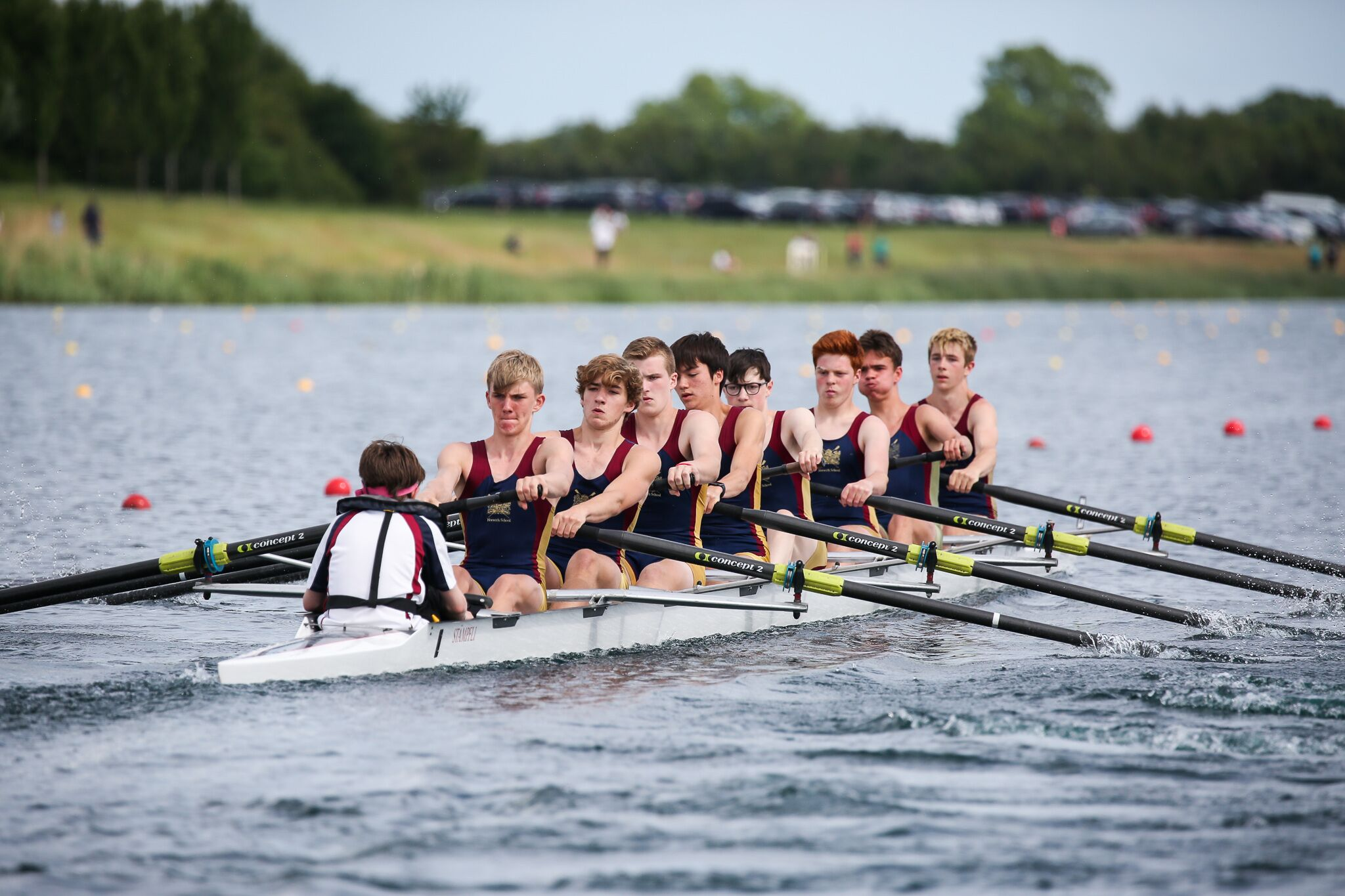