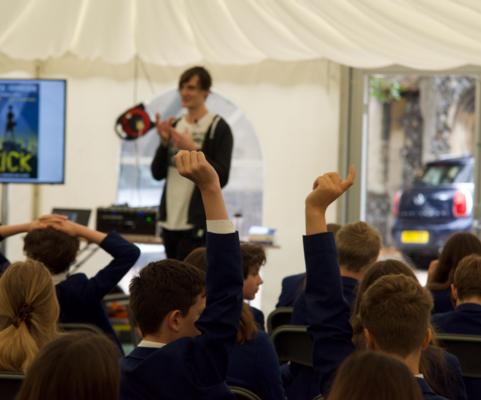 Lower 4 were lucky enough to have a whole book-themed day on Thursday this week, with a chance to listen live to local authors, an illustrator and a performance poet – a real treat in light of all of the activities which have taken place online in the past sixteen months.

The day started with Mitch Johnson talking about his latest book Pop!, which tells the story of a lost secret recipe belonging to the world’s biggest fizzy drink manufacturer. It follows the main character Queenie, after the recipe washes up in a (plastic) bottle on a beach near her home, and as she goes on the run and experiences lots of adventures and uncovers plenty of secrets on the way.

Mitch talked about the very serious message behind this light-hearted book, and shared stories of real multinational companies and their polluting practices, as well as their marketing strategies including a fascinating delve into the subject of product placement in films and on TV.

Pupils played a game called Play your carbs right, in which they guessed the sugar content of some popular fizzy drinks and learned about the Great Pacific Garbage Patch – 5-6 times the size of the UK, as well as hearing some shocking statistics about dental health in children, and the sheer quantity of plastic produced – 3 million tons of plastic per year by Coca-cola alone.

The session rounded off with some concrete examples of what we can do to help in the war against plastic, and Mitch talked about how his books were his main form of environmental activism.

Jarrold books were on hand selling copies of Pop! and the author signed copies for pupils, which will be quarantined for three days before being ready for collection.

Next up were two parallel sessions where pupils had the chance to do some illustrating or to write some poetry. Ivan Bates, local children’s book author and illustrator, talked with half of the year group about the role of a book illustrator, and explained some of the practicalities of putting together a book with pictures. Pupils were introduced to the Rule of Thirds, and studied some examples of artists such as Turner, van Gogh and Monet, who used this rule for their own compositions. There were some fun drawing activities including drawing your partner without looking at the drawing or lifting the pencil off the page, incorporating text into illustrations, and working within a template, as well as the chance to see a professional illustrator drawing, which is always magical to watch.

Local actor and poet Poppy Stevens presented a poetry session for the other half of Lower Four, where she talked about performing poetry as well as about writing it, and about how performance poetry had been the hook for her to become interested in poetry. She read and performed some poems of hers and from other poets, and then it was the turn of the pupils to write their own. After some brainstorming sessions, they did some free-writing in timed conditions, where the idea was to write freely without the interference of your own prejudices or criticisms. Pupils also had the chance to edit their work and some had time to read their edited pieces aloud.

The day was rounded off with a talk from local Young Adult horror writer Alexander Gordon Smith. Gordon talked of the heroism, humanity and hope to be found in horror fiction, and likened it to the telling of fairy tales to very young children. His talk was very entertaining as he regaled some of his own childhood experiences – including the time he tried to stay in a haunted house before he realised that he didn’t have to directly experience everything that he wanted to write about!

Gordon talked passionately about the importance of asking What If? when writing fiction, and about starting with your own fears and putting something of yourself into your writing. He mentioned the people who had encouraged and discouraged him in his writing and offered his own advice to young writers.

Jarrolds books sold copies of Lockdown: Escape from Furnace, and pupils had the chance to get their books signed by the author, which will be ready to collect from Monday next week.

After a long spell with no in-person author visits, it was an especially lively and stimulating day for all involved, and no doubt an experience that pupils will be talking about for some time. 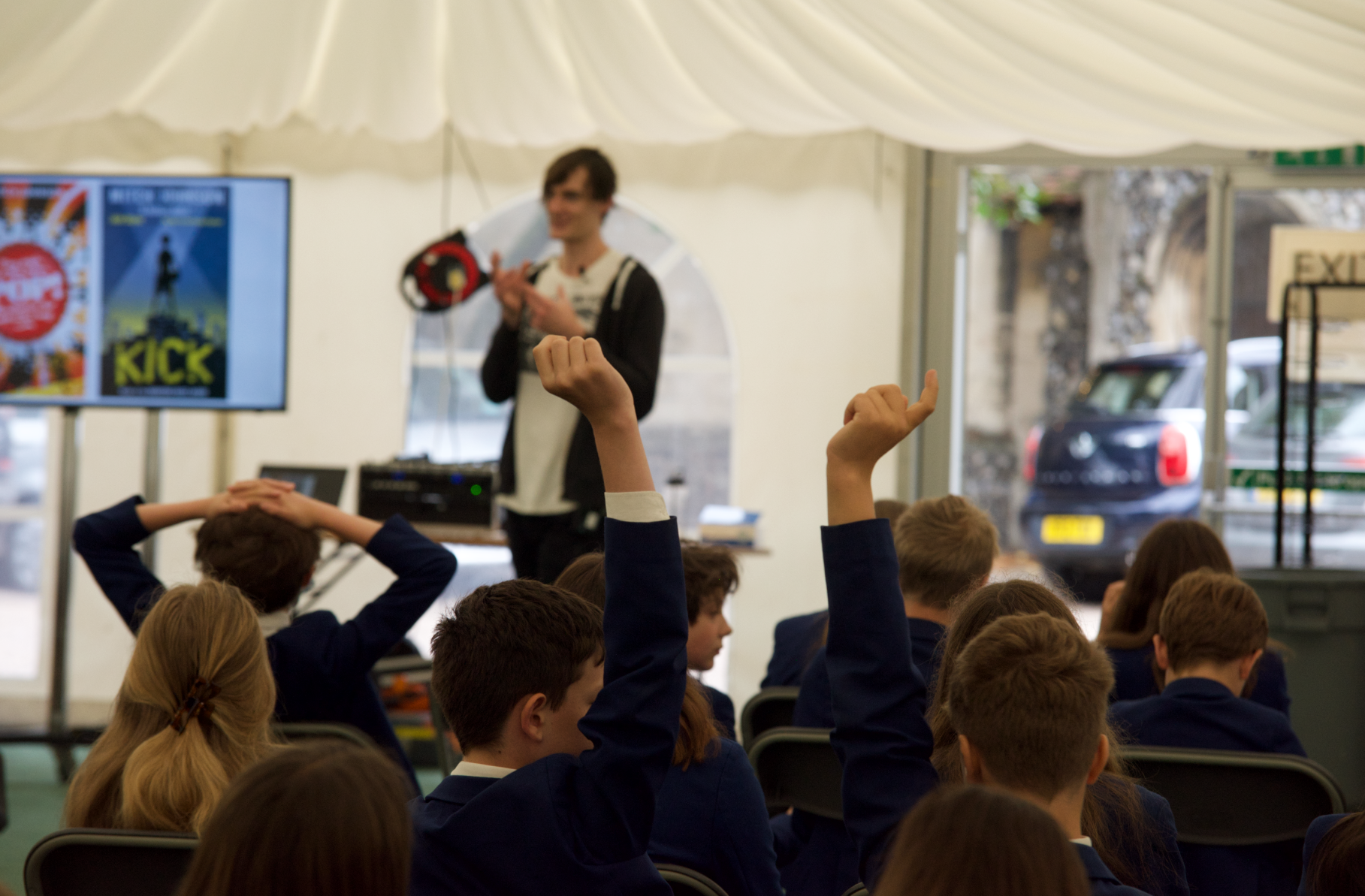