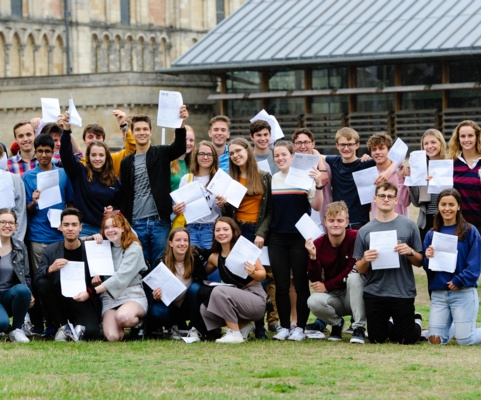 Exciting university offers for our Upper 6

Many of our current Upper Sixth are being offered places at a range of top universities. It is exciting to see the different career paths that they have chosen, both in terms of courses and locations around the world, including the USA, Hong Kong and Holland.

Craig Hooper, Head of 6th Form, said “The sheer range of courses that our pupils apply for and get offers from is impressive. The pupils work hard, and with the support of their families and the school, many go on an exciting journey once they leave us. Last year 76% of Upper Sixth secured their first-choice university.”

Norwich School places an emphasis on equipping pupils with the skills that they need for whichever direction they choose to take. This year, six pupils have received offers from Oxbridge, three of whom will be studying Music, and many have been offered places from top universities including Bristol, Durham, Nottingham, Leeds, Edinburgh and Exeter.

The courses applied for range from Medicine, Dentistry, Engineering, Physics and Law to Sports Science, Linguistics, Psychology and Theatre & Performance Drama. A couple of pupils have been offered sports scholarships in hockey and gymnastics in America, enabling them to pursue their dreams. This year, in particular, the number of offers to study medicine has been impressive with some pupils receiving offers from three or four of their chosen destinations.

The school provides many extra-curricular opportunities for pupils, which are valued by universities, including the Duke of Edinburgh Award, Young Norfolk Sports Academy, Community Service and the Gather Arts Festival. The school has recently been awarded the prestigious TES Whole School Community Initiative award, in recognition of its outreach work, which also provides pupils with opportunities which they can speak about in the university application process.

Pupils are guided through their university applications by an Advice Team which includes the Head of Sixth Form, as well as the Head of Careers, UCAS and Further Education. Interview practice and university visits are built into the Sixth Form programme, allowing pupils to make their applications with confidence and in good time.

Offers are still coming in this year and we wish everyone good luck for the remaining weeks!

Josh Gilmour: alongside many UCAS successes, Josh has also applied to the Dyson Institute of Engineering and Technology and has got through the first few stages.

USA: Lauren Rowe ON has been accepted on a hockey scholarship at North Eastern and Laura-Rose Cooke also has an offer from Iowa State.

Hong Kong: we have several International pupils who have also applied to Hong Kong and who have received offers based on their UCAS predictions from the 4 leading Hong Kong Universities.

Holland: there are at least two candidates applying to the Netherlands for courses.