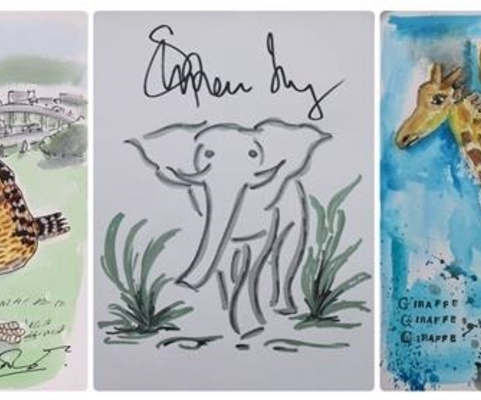 Norwich School are excited to be supporting Norfolk based charity, Explorers against Extinction, by hosting their Sketch for Survival exhibition in the Crypt Gallery from Friday 23 -  Sunday 25 November. This will be the final opportunity that the public have to see the artwork - which was also shown in London, Manhattan and New York - before being auctioned online.

The exhibition organisers asked wildlife artists and celebrities to help them raise awareness about the illegal wildlife trade and threat of species extinction by donating a 26-minute sketch or other original artwork of an endangered species, because an elephant is poached for its tusks in the wild every 26 minutes.

The charity has been inundated with support for its 2018 initiative, receiving 476 artworks from more than 30 different nationalities representing well over sixty rare and endangered species around the globe, including elephant, rhino and tiger – the three species most at risk from the billion-dollar illegal wildlife trade which has taken the lives of over 100 rangers in the last 12 months alone. The illegal wildlife trade is the third largest global trade after narcotics and human trafficking.

The headline project this year is an elephant anti-poaching initiative with non-profit African Parks in Garamba National Park, Democratic Republic of Congo. Garamba, a UNESCO World Heritage site used to be home to more than 22,000 elephants but today only 1200 remain. A new anti-poaching canine unit will better equip Garamba’s teams to address threats.