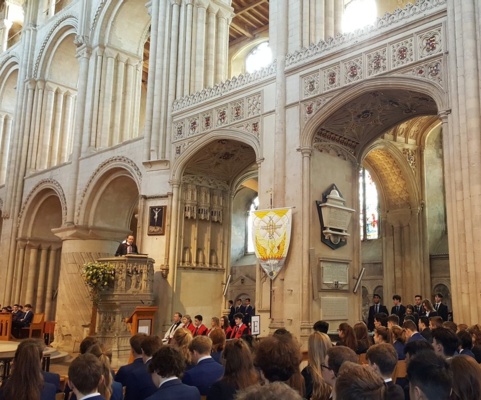 Start of term address by the Head Master

Head Master, Steffan Griffiths, addressed pupils this morning in a thought-provoking assembly at the start of the Trinity term... This morning's reading connects wisdom and humility, contrasting it with actions which arise from envy or "selfish ambition":

"Who is wise and understanding among you? Let them show it by their good life, by deeds done in the humility that comes from wisdom.  But if you harbor bitter envy and selfish ambition in your hearts, do not boast about it or deny the truth. Such "wisdom" does not come down from heaven but is earthly, unspiritual, demonic. For where you have envy and selfish ambition, there you find disorder and every evil practice.

But the wisdom that comes from heaven is first of all pure; then peace-loving, considerate, submissive, full of mercy and good fruit, impartial and sincere.18 Peacemakers who sow in peace reap a harvest of righteousness."

This is an interesting area after a holiday in which the leadership group of Australia's cricket team was sacked and roundly criticised for deliberately seeking to alter the condition of the ball during an international match, and when there has been a week of extraordinary fightbacks in various sports matches, both here and abroad.

The England netball team managed to win both the semi-final and final in the Commonwealth Games with the last shot of the game, while the teams of Juventus, Roma and Liverpool offer good examples from men's sport. Interesting stuff too on the day that we welcome Kate Richardson-Walsh, the captain of the GB women's hockey team, which famously won Olympic gold in Rio in similarly thrilling circumstances. Sport is obviously not the only forum to observe group culture and teamwork under pressure, but it does offer a high-profile but relatively safe prism through which to investigate how group dynamics work. I was going to include Manchester United in this last list, but their capitulation yesterday handed the Premier League title to Manchester City, the very local rivals they had fought back to deny last week. Matthew Syed, former international table tennis player and now newspaper columnist, believes that the issues at Man United stem from the culture of leadership at the club. When they were knocked out of the Champions League by Seville earlier this season, he identified that the manager, Jose Mourinho, used 25 first person pronouns in the first few minutes of his press conference. Syed identified this as narcissistic leadership, comparing Mourinho to a study by Hambrick and Chatterjee which found that the size of the picture of a company's CEO in the annual report was closely correlated to this leadership style; its most obvious example was Enron, the multinational which spectacularly fell from grace at the turn of the century. How bizarre that such a relatively trivial measure as a photo can be traced as evidence of an institution-wide culture; I will have to think carefully about what goes up in the Bishop's Parlour when the time comes.

The implication from these case studies is that if the values behind the leadership are not right, over time the outcomes are unlikely to be right either. As James would have it in the reading, more wisdom and humility, less ambition and envy.

By contrast, I encourage you to investigate the leadership of one Ludwig Guttmann. A Jew who came to the UK to flee Nazi Germany before World War Two, Guttmann is the founder of the Paralympic movement, having established a national centre for spinal injuries at Stoke Mandeville in 1943. Throughout his remarkable life, there are countless examples where he overcomes obstacles personally and for his patients through a combination of determination, vision and care for others. Most of all, he recognised the humanity of the physically disabled and the healing power of motivation and hope. It seems extraordinary to us after watching the seamless integration of para-events at the Commonwealth Games that Guttmann seems to have been the first to do so only 70 years ago. You can find out more by visiting the National Paralympic Heritage Trust exhibition, which can be found behind me in the North Transept in the first half of this term. I commend it to you.

"I commend it to you" is something I say a lot from up here when we advertise a new show, concert or exhibition. I challenge you actually to follow up on these recommendations: tutors, take your pupils to see this exhibition; pupils, ask your tutor to take you. Towards the end of last term, we had some simply stellar offerings such as the Senior Play, the Choral Society Concert with the London Mozart Players or the Careers Evening. Money was no barrier for attendance to members of the school but I am not sure the take-up by the Norwich School community was as positive as it might have been. When we get it right, our cultural offerings are not just "good for a school" or "good for children", they are good by an absolute standard of ambition and quality. Part of our aim in offering a rounded education is to give you the chance to see such things while you are here; they broaden your experience and widen your perspective. The Young Norfolk Arts Festival, the outreach sister event to our own Gather 18 Festival, sets as its aim to offer young people the chance "to watch and perform, to organise and record" cultural activities of different kinds. I think we at Norwich School are good at the performing and we are getting better at organising and recording. Let's make sure that we don't miss out on the opportunity to watch, too.

With several plays coming up at the start of term and Gather '18 on the horizon, I look forward to seeing you in the audience soon. And in between, there is the matter of some quizzes for all of us. More from me on them tomorrow, but my main message will be to keep them in perspective.

I hope you all have a good term.