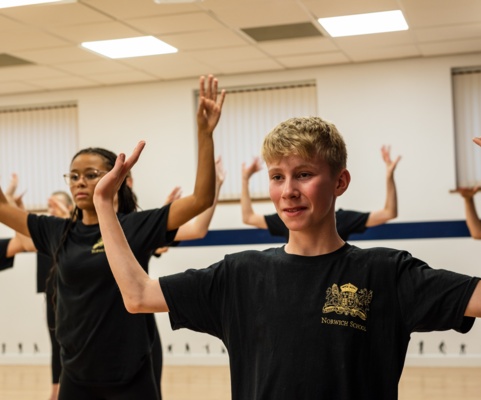 Spotlight On : Co-curricular – Creating a Song and a Dance

As part of our Spotlight On : Co-curricular here at Norwich School, we caught up with Sally Hacking, who is one of the newest members of staff at the School, joining us this academic year as Head of Dance & Performing Arts.

How long have you been at Norwich School?

I have been in role since September this year.

What does the role of Head of Dance & Performing Arts involve?

It involves many and varied activities – from rehearsing for the musical, to organising drama plays, to putting on dance workshops. No two days are the same, but one thing is always guaranteed– I can be found in rehearsals somewhere in the School!

What opportunities are open to pupils interested in dance?

There is a wealth of dance opportunities for getting involved in if pupils have an interest in or passion for dance! Next term there will be dance clubs on Mondays after School for the Fourth Form, Wednesdays after School for the Fifth and Sixth Form, and hip hop/commercial classes after School on Tuesdays, open to all. There will also be workshops and performance opportunities to get involved with, including a partnership with a contemporary workshop with James Cousins Company for the Fifth and Sixth Form (resulting in a professionally filmed dance film!). Plus, we have the Senior Dance Festival where students can show off their choreographic and performance skill sets!

Why do you think dance is an important element of the co-curricular calendar?

Dance gives pupils both a creative and physical outlet in their week, allowing them to express themselves in a way that is unique to the art form. Dance also helps build confidence, creativity and collaborative skills,. However, most importantly, it is lots of fun!

The dance studio has been a hive of activity this term! The senior musical cast worked hard on their repertoire for the show in the first half term, whilst in games lessons pupils have been perfecting their technique and working on performance pieces. Additionally, students from the Fifth and Sixth Form have been leading independent choreographies which will form part of the junior dance festival. There has also been a dance and circus workshop with the brilliant Motionhouse Company and many after School and lunchtime clubs developing pieces for the show.

This term the Norwich School Dance Company was also established, an audition only group, who have been putting together their ensemble piece to enter the national Great Big Dance Off Competition. It has been brilliant to see so many of the School community getting involved, I can’t wait to see what they get up to next term!