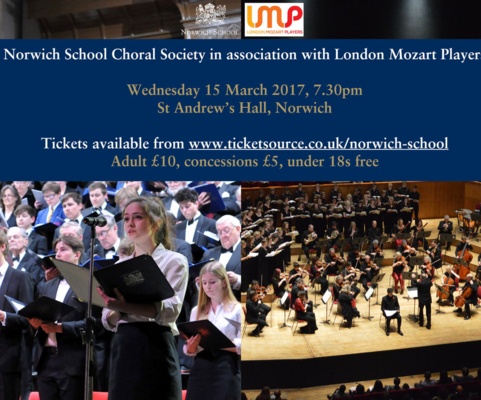 Old Norvicensian Simon Eades (63-72) writes for the blog about the upcoming Norwich School Choral Society concert in association with the London Mozart Players. Tickets are available from the School's online ticket site www.ticketsource.co.uk/norwich-school:

In a months time I will sing bass in the Norwich School Choral Society performing "Vespers" by Richard Allain in St Andrew's Hall in a concert which includes the following:

How did I get here?

Fifteen years ago in September 2002 I returned to the School Chapel to sing in the weekly rehearsals of the Norwich School Choral Society. These Wednesday evening rehearsals became an oasis of calm in what was, at that time, a busy time for me and I did so because I wanted to do something different. My first performance with the Norwich School Choral Society, consisting entirely of boys, was in March 1966 when, we performed Eric Thiman's "Songs of England" at the UEA Lecture Theatre. The following year we performed four choruses from The Creation by Haydn a work I was to perform many years later.

Since the 1960s the range and quality of the musical abilities in the School has improved as each year passes and this is due in no small part to the superb efforts of the Music Department under Colin Dowdeswell who was appointed as Director of Music in 1983. Colin passed the baton to Richard Allain in 2010.

Shortly after his arrival Colin established The Norwich School Adult Choral Society in 1983 and the first concert under this new identity took place on Friday 2nd March 1984 in Norwich Cathedral. The works performed were Faure's Requiem and Haydn's Te Deum. In recent years the annual concert moved to St Andrew's Hall.

In 2016 the Choral Society performed highlights from Les Miserables, music from James Bond and some operatic arias as a complete contrast and a change in direction with David Dunnett providing the accompaniment on the piano.

Following last year's concert Richard, an accomplished composer of modern music in addition to his role as Director of Music, shared his thoughts with a few members of the Choral Society. He decided that we would be able to perform one of his works.

Since September we have been on a voyage of discovery learning to perform "Vespers", a work he composed in 2011. Rehearsals in the School Chapel - a stimulating environment on a cold Wednesday January evening - are proving to be a challenge and are hard work but enjoyable. They are turning into "Ask the composer" as we try to interrogate the dynamic of this challenging work!!!!!!!! I have been asked on many occasions why I keep coming back each year.