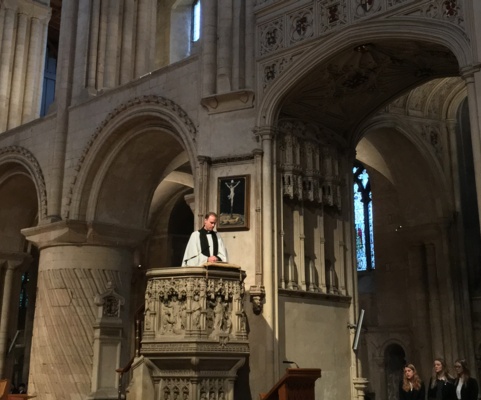 Then Jesus said to Thomas, ‘Put your finger here; see my hands. Reach out your hand and put it into my side. Stop doubting and believe.’ Thomas said to him, ‘My Lord and my God!’ (John 20:27-28)

“What I'm asking for is hard. It's easier to be cynical; to think that change isn't possible, and politics is hopeless, and to believe that our voices and actions don't matter. But if we give up now, then we forsake a better future.”

Those were Barack Obama’s words as he was campaigning to be president. They were particularly directed at people who doubted the whole American political system – people from poor backgrounds, people of colour, people who had never voted before because they didn’t see they point. Barack Obama asked them to overcome their doubts and their cynicism. As a result, America elected its first black president.

Doubt isn’t always a bad thing. Whenever we have a doubt about something we ought to stop and check that we’re seeing the world correctly. But when doubt becomes an attitude, when we start to doubt everything, then we should be concerned – because we’ll stop believing that there is any kindness or goodness at all in the world. As someone once put it: an optimist sees the doughnut; the pessimist only sees the hole.

The character at the centre of today’s Bible reading is Thomas. He’s known as ‘Doubting Thomas’ because he was the disciple who, after people said they’d seen Jesus risen from the dead, made it clear he wasn’t going to believe the impossible.

Perhaps Thomas’s historical nickname is a bit unfair. Can you blame him for being sceptical about someone rising from the dead? And of course, he does change his mind. He is present when Jesus enters a locked room, and shows his wounded hands. When Thomas is told to ‘stop doubting and believe’, that’s exactly what he does. So perhaps it would be more accurate to call him ‘Sceptical Thomas’ or ‘Not easily persuaded but gets there in the end Thomas.’

The idea I want to share with you is this: people of faith are those who make an effort to believe. Yann Martel’s novel The Life of Pi is about a boy who gets stuck on a lifeboat with a Tiger. It’s also a thoughtful novel about what people are prepared to believe. At the end of the book, Pi gets frustrated that the two people interviewing him find his story about what happened on the lifeboat hard to believe, and he says this:

Mr Griffiths reminded us at the start of term that there are people of faith around the world – and indeed in our school – who are marking Easter and Passover and Ramadan this week, as these calendar dates coincide this year. Whatever faith background you come from, and whatever doubts you may have about faith, I would ask you to admire, or at least appreciate, what people of faith are doing in seeking the positive perspective of belief.

And in general may I recommend open-mindedness and looking for the positive as a healthy state of mind. To go around being always doubting and cynical will eventually hinder your education. It will stop you taking new and interesting things on board, because you won’t believe that anything new or interesting is possible.

A final thought about the new words and images that you will all have seen on the refectory windows. I rather like these “voices” that capture the best things that we say to ourselves at school.

“This is my moment.”

“I made a difference.”

“We made our voices heard.”

It occurs to me that on some days we will probably walk past those words and think the opposite. “I can’t do it.” “My moment will never come.” “My voice will never be heard.” On those days our challenge will be the same as Doubting Thomas’s – we will need to “stop doubting, and believe.”

When we are full of doubt, please give us faith and hope.

Help us to believe that a better future is possible.

Give us faith and hope as we pray for a world where people are not judged by the pigmentation of their skin.

Give us faith and hope as we pray that nations will put aside their local interests, and work together to treat the environment with care.

Give us faith and hope to see all the good in the world as we go into this new day. Amen.