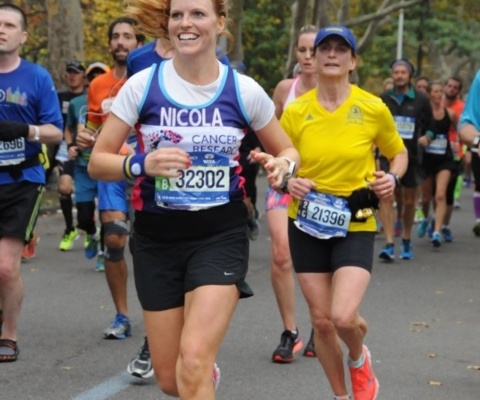 The story of my second marathon begins with posts from my Justgiving fundraising page.

On November 1st this year, I will be running my 2nd Marathon - this time in New York! You may recall that 7 years ago I ran the London Marathon and raised over £1500 for the Bliss premature baby charity (thank you to those of you who helped me raise so much that time too!). This time, I have chosen to raise money for Cancer Research - Kids and Teens.

03/10/15 05:33   My training reached a high just a couple of weeks ago when we were in London for the weekend and I managed to clock up 56 000 steps on my phone (a 20 mile training run followed by non-stop trekking around the city). Took a screen shot of it too as couldn't believe it was real!! 10/10/15 01:24   I've just got back from my final long run before I begin the tapering period - the big day is only 3 weeks away! It felt ok - 21 miles in the pouring rain took just over 3hrs. A big thank you to all my recent sponsors - it made me run harder knowing you're all supporting me!

25/10/15 07:56   Today I ran my last long run before my 'big day' in the 'Big Apple' next week - 10 miles. Now for the final tapering section of my training and I simply can't believe that by this time next week it will all be behind me! Thanks again to everyone who has sponsored me so far.

1/11/15 09:00   The final day - at last I had made it to Staten Island for the big event - 26.2 miles through the 5 boroughs of New York City, finishing in the infamous Central Park. Only now was I beginning to believe that my 26.2 mile challenge was actually about to happen! At 5am I woke in our hotel room to the kettle boiling - my husband had woken ahead of me to boil some water ready for my first porridge pot (I would take one with me to the Start Village in the hope of finding some more hot water there - I was not to begin my run until 1015am - I was in Wave 2 following the elite men -  and knew I would need to refuel again before then). I didn't stop smiling all the way round - it was an emotional rollercoaster, with the beautiful scenery of New York; its imposing tall buildings and stunning colours of Central Park forming an amazing backdrop to such an incredible experience.  My ears were ringing with New Yorkers shouting 'Go girl' and come on 'Ni-cola'  in their American accents of which I was so unfamiliar.

My feet didn't seem to touch the ground for the entire 26.2 miles - the amazing crowd and atmosphere carried me along.

I made it across the finish line almost half an hour quicker than my previous best of 4:19. People at home were tracking me and every time I crossed a 5km point I felt like my footprint was sending a message home, saying  'I can do this!!'.

After the event, here are the stats that Mr Todd retrieved for me from the NYC Marthon website. In his weekly email to our Cross Country runners ahead of our next training run he wrote: The medal was the biggest one I've ever won by far and the morning after there was the option to get it engraved while I waited - which of course I did! My name also appeared in the New York Times the day after too!

So far I have exceeded my £1000 target for Cancer Research and the money is still coming in!

I am already planning my next challenge - hoping to run another of the six major marathons in the next few years (maybe Berlin or Tokyo?).