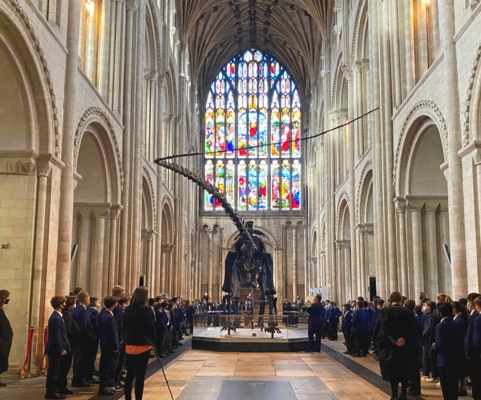 Mr Gent on Dippy the Dinosaur

Dippy, the Natural History Museum’s iconic Diplodocus cast, has taken up residence in Norwich Cathedral’s Nave for the final stop on his nationwide tour. This week, Fourth Form were fortunate enough to enjoy an assembly in the Nave, under the cast of Dippy. They heard all about Dippy from Mr Gent, who also shared his reflections on what we can learn about climate change from the decline of the dinosaurs and why it is important we act now.

You can find his address and a recording of the assembly below.

"What a privilege it is to share this space with Dippy.

The word Diplodocus comes from the ancient Greek words diplos and dokus, meaning double beam. This refers to the bones on the underside of the tail. And what a tail it is, long and whip-like, could Dippy have used it for defence against an Allosaur as well as to balance its incredibly long neck?

Dippy has 292 bones. If the skull and jaw count as one. But if they are counted as separate bones, the total number of bones in the skeleton is 356. Compared to 206 bones in an adult human. Dippy has 15 vertebrae in his neck. Most mammals today, including the giraffe have 7.

Dinosaurs are a group of reptiles that dominated life on land for more than 160 million years. Between 230 and 66 million years ago. Homo sapiens, our species, have been around for an estimated 0.3 million years.

At 26 metres long Dippy is one of the biggest animals to have walked the earth. It has a long neck that it would have used to reach high and low vegetation, and to drink water and there has been much debate over how such a long neck would have been held.

Scientists now think that ligaments, the tissue which holds bones together, running from the hip to the back of the neck would have allowed Dippy to hold its neck in a horizontal position without using muscles. If you look at the vertebrae (backbones) they are split down the middle and this space could have held ligaments like these.

Looking at Dippy's teeth, you might be forgiven for thinking that Dippy was a carnivore. In fact, the needlelike teeth were used to strip vegetation. Dippy would probably have swallowed leaves whole, without chewing them as it lacks the molar teeth that we see in modern herbivores so may have swallowed gastroliths, or stones, that remained in its stomach to help grind up the tough plant material for digestion.

So what would Dippy have eaten? Its main food was probably conifers, which were the dominant plant 155 million years ago. Other food sources could have included ginkgos or cycads, club mosses and horsetails, all plants we see present now. However, the landscape when Dippy was around would have looked very different to the woodlands and forests seen today. Flowering plants had not evolved. So none of the trees, grasses and plants that we're so familiar were present. Imagine, no grass. Instead, there would have been lots of fern species, similar to bracken that we see today.

Where did Dippy live? All diplodocuses have been found in Western America in Colorado, Montana, New Mexico, Utah and Wyoming in what is known as the Morrison Formation. This is a distinctive sequence of sedimentary rock, composed of mudstone, sandstone, siltstone and limestone. When Diplodocuses were alive, the USA was part of the northern supercontinent Laurasia and what are now large areas of deserts would in the Jurassic period have been warm green flood plains teeming with life.

Would there have been diplodocuses in Norfolk? Whilst we have a wonderful range of fossils found in Norfolk, examples of which can be seen in the hostry and include woolly mammoths and rhinoceroses, the rocks these are found in are much more modern than the Morrison Formation. Our climate here at a similar time would have been that of a shallow tropical sea punctuated with islands. So the answer is probably no, there would not have been diplodocuses in Norfolk.

When did Dippy live and how do we know? The rock formation in which Dippy is found is between 148 and 155 million years old. The fact that the fossils are found in rocks of this age tells us that Dippy must have died and been buried in the sediments that formed these rocks.

How do we know that the environment was lush and green when Dippy was alive? Well, a large number of other dinosaur species have been found In the Morrison formation. These include some of the old favourites like the Stegosaurus, Allosaurus, early Ankylosaurs and flying Pterosaurs. An obvious omission from the list of dinosaurs that coexisted with Dippy is Tyrannosaurus Rex. More on that later. Skeletons of salamanders, frogs and lizards have also been found in the area. Indicating that the area was a lush and fertile wetland habitat bordered with trees.

This cast of a diplodocus skeleton was donated by Andrew Carnegie – a Scottish-American industrialist, to the British Museum at the request of King Edward VII after he saw a sketch of the bones whilst visiting Carnegie's Scottish home. The original specimen is housed in the Carnegie Museum of Natural History in Pittsburgh.

Since Feb 2018, Dippy has been on a tour of Britain visiting 8 venues, of which Norwich Cathedral is the last port of call. And how magnificent Dippy looks here. I love the way the ribs and the vaulted roof share such fantastic shapes and symmetry.

One of the key aims of the bid to have Dippy here in Norwich was to highlight man’s impact on climate change and global food security. I encourage you to take a good look at Rebecca Osbourne's illustrations on display near the West door, which brilliantly explore these important themes.

So what is the link between Dippy and climate change? The climate has always been changing. To cut a long story short, climate change drives evolution through survival of the fittest, meaning that some organisms survive changes and others don’t.

So what caused the demise of the dinosaurs? The common theory is a meteorite impact with earth which caused a rapid change in the global climate. Changes in sunlight, temperature and food availability. Does this sound familiar?

30 years ago when I was a student at Norwich School, I was taught that carbon dioxide concentrations are increasing rapidly and I was taught about the impact of that on our climate. The melting of the ice caps. The declination of the Gulfstream, changing rain patterns around the globe. I gave assemblies on the impact of climate change and the demise of species in Africa.

Fast forward 30ish years and I'm teaching Middel Five exactly the same material. But with one significant difference. I was taught that atmospheric CO2 concentration was 0.03%. We now teach the atmospheric CO2 concentration is 0.04%. This might not seem much, but it is a 33% increase in 30 years and it is now widely agreed in the scientific community that we're reaching a tipping point with carbon dioxide concentration, beyond which the global temperature will increase beyond our control.

This will impact fresh water supplies across the globe and crop production. A 2-degree rise in average temperature in the UK would mean that our wheat crops will fail and it's estimated this could happen in the next decade. We are already seeing the increased energy in the atmosphere causing more frequent and more powerful storms. The day we broke up for the summer, as Mr Campbell and I were building the Time Tunnel, the fire brigade was here pumping water out of the cathedral when a rainstorm similar to one you would see in the tropics caused widespread flooding in Norwich.

As we rapidly approach the COP 26 conference in Glasgow in November, this month visitors to Dippy have been encouraged to take a pledge to help protect the planet for generations to come. Written on leaves, these pledges are placed on the trees around Dippy. They make a striking visual statement. Some of these leaves will be taken up to the COP 26 Conference in Glasgow by the Bishop of Norwich.

These pledges include actions such as:

I’ll put a jumper on instead of whacking up the central heating.

Turn off the TV when not watching it and unplug phone chargers.

Others have taken their actions further. Greta Thunberg was speaking at the Youth4Climate forum this week as part of her continued campaign to call out world leaders over their environmental policies, or lack of them. This is something we can do on a more local level, writing to MPs to put pressure on them to change their party manifestos in the lead up to the next election. When my wife worked for WWF as a political lobbyist, their research showed that for voters at a general election, the environment would only come in as 7th in the list of priorities the public look for in party manifestos so it's no wonder that the current government have little in the way of environmental pledges and even reduced the need for sustainable development for new housing, tearing up 10 years worth of work from environmental groups. Voting for a party that places a greater emphasis on the environment will send a big message to our politicians.

In the 1940s stood where you are now was a young man called Joseph Farman. Little did he know that whilst working for the British Antarctic Survey, he would publish a paper about detecting a hole in the ozone layer. This lead to what is widely considered the most successful global environmental treaty ever to have been put in place, The Montreal Protocol, banning the use of CFCs. In 2019, NASA reported that the hole was the smallest ever since it was first discovered in 1982.

We each have a role to play, starting at home and spreading into the political landscape. We all need to do our bit to help reduce our impact on the environment. Who knows, one of you could be the next scientist, politician or leader to trigger a groundbreaking change in British and Global attitude to reducing our impact. What cannot happen is for the same message to be given in 30 years time as it is likely then to be too late to avoid many of the consequences of human-induced climate change."