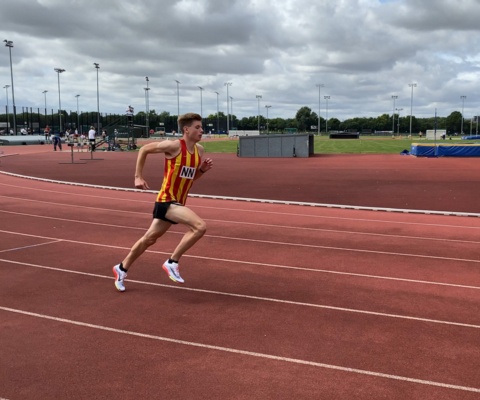 ON James Price (12-21) left Norwich School after completing his A Levels in 2021. He now goes on to Loughborough University, where he will study Mechanical Engineering. James is a talented athlete and in this blog he reflects on his love of running and his hopes for the future.

I first became interested in running as a member of the Norfolk Orienteering Club and through the Lower School Running Club with Mr Brook. I then started doing parkruns with my dad; my first one was in January 2014 at Eaton Park when I ran 5k in 25:16. I kept returning to the parkruns and realised that I was running faster. I then joined Elite Runners with Mr Hudson after school every Monday (and became even faster) which led me to join the City of Norwich Athletics Club (CoNAC) in August 2017 where I receive professional coaching and attend regular training sessions.

In addition, on Mondays and Wednesdays, I do two separate gym sessions, created by Mr Rodrigues and assisted by Mr Daalhuizen and Mr Cooke. Their combined advice and support within the Athletics Development program has been invaluable to help with my running. Even during Covid lockdown, Mr Rodrigues devised two different gym sessions using the equipment I had available at home, which supported the training sessions I was able to do on various fields around south Norfolk.

Finally, to prevent injuries, strengthen weaknesses and increase flexibility, I spend up to an hour five days a week doing band exercises and stretching.

So, you may ask, why do I follow such a strict routine? Basically, I enjoy running fast in a group of people and enjoy pushing myself to my limits.

My last race in 2020 was English Schools Cross Country in Liverpool on 14 March just before the first lockdown (I remember on the start line joking with the other counties that Norfolk was the only county in the country without a single Covid case at that time). Prior to that, I had been competing nearly every weekend for almost three months.

There were no competitive races until April 2021, which meant a whole year without school, club or national events. However, since then I have taken full advantage of the return of competitions and travelled to races in Sussex, Watford and Cambridge, as well as to local events, including the parkrun at Eaton Park where I set a new 15-17 age category record of 15:20 - nearly 10 minutes faster than my first event there. I have just completed my first full track season achieving some personal best times of 2:01.5 for 800m and 4:01.2 for 1500m.

My training will now focus on the road relay season and cross-country events. I am about to go to Loughborough University (to start a 5-year Masters Degree in Mechanical Engineering) and am looking forward to training at their world-class sports facilities. My goals for the next track season are sub 54 for 400m, sub 1:57 for 800m and sub 3:55 for 1500m. I have a 5k race in October where I will aim for sub-15 (current pb 15:09), and I look forward to tackling the Mousehold Cup Run route again as an ON in December.