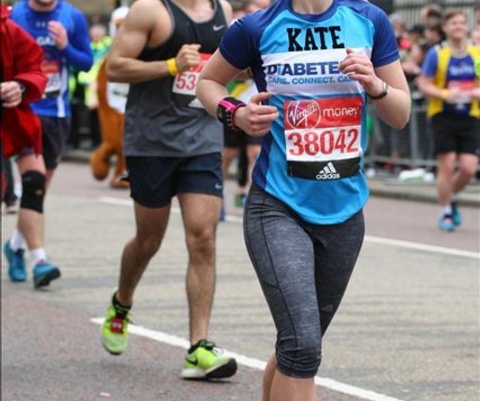 This morning I am celebrating the fact that I can once again navigate my way down a flight of stairs without weeping. What's more, earlier today I taught an entire lesson standing up, and I didn't wince once! It seems that my legs may have finally forgiven me for taking on 26.2 miles of London pavement last weekend.

The London Marathon is the largest annual fundraising event in the world, and this year I decided to join 39,697 other crazy people (also known as runners) to take part in this amazing race. I was lucky enough to be given a place on the Diabetes UK team, so alongside training, I also managed to set a new PB for the number of sponsor-me-please status updates on my Facebook page.*

Running in aid of Diabetes UK made my first marathon experience such a positive one. The charity does a huge amount to support the 3.3 million people living with diabetes in the UK, as well as raising awareness of this often misunderstood condition, and funding research into potential cures. The cause is important to me, as several members of my family suffer from a recently discovered (and rarely diagnosed) genetic form of diabetes called MODY. Like Type 1 diabetes, it's unavoidable, tough to manage, and can have a serious impact on both long and short-term health. I truly admire everyone who lives with the condition - give me a marathon any day! After months of wintry training runs, gallons of Lucozade, and excessive amounts of pasta, the big day arrived, and I was thrilled to be woken by the loudest 6am hailstorm I have ever heard... Fortunately the weather cleared, and we began our run in Greenwich Park under blue skies. The race itself went by in a blur. There were some incredible high points (the adrenaline rush at running past the iconic Cutty Sark, being cheered over Tower Bridge by my friends and family, the fact that I wasn't overtaken by a man dressed as a fridge), and the inevitable lows (a stitch at mile 17, weirdly numb arms and legs as I ran down the Mall, the fact that I was overtaken by a man dressed as a washing machine...)

My main feeling as I crossed the finish line after 4 hours and 7 minutes of continuous running was extreme dizziness! But this was quickly replaced by relief, and a real sense of achievement. Sunday marked the 36th year of the London Marathon, as well as the millionth finisher in the race's history, and it was brilliant to be a part of something so special!

Also, the medal is really cool. *Thank you to everyone who has helped me to raise over £1500 so far! If you haven't donated and would like to, my JustGiving page is still active at: www.justgiving.co.uk/kateharriet