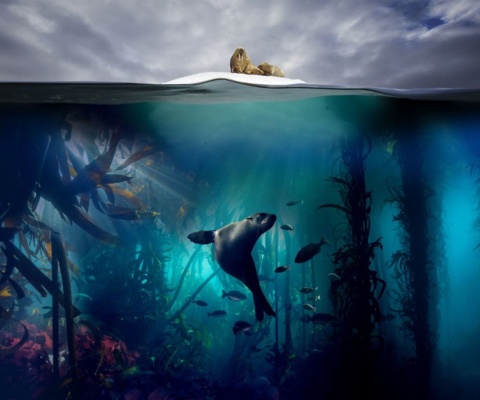 "Well, we are nearly there. After all the homeworks, Cathedral services, fixtures, practices, performances and lessons, the routine of term is almost finished and we all now deserve a good rest, a chance to choose what we do a little more, perhaps even a chance for a treat or two.

For me, one small treat that awaits is to see the final episode of Blue Planet II, a series I have been avidly following on Sunday nights during term. I am not alone; this series has been seen by up to 14.1 million people per episode in the UK and is the country's most watched programme in 2017. If you have not yet caught up with it, I recommend it strongly. Whether it has been the octopus using shells to disguise itself from an attacking shark, the pilot whale in mourning, fish using tools to feed or Tagboy the sea lion herding tuna into lagoons of Madagascar, the stories have been engrossing. I should not be surprised if purists are disappointed by the need to portray the already astonishing footage of the natural world by turning them into human-like dramas with atmospheric music, victims, heroes and villains (I still can't get the bobbit out of my head; if you have not seen it, think 1 metre carnivorous worm that jumps out of the sea bed to catch its prey). However, even the most dispassionate observer would have to admit that the sea otters were very sweet! And if a little soap opera is what is needed to get mass appeal and therefore broaden awareness of the mind-boggling scale and sophistication of nature, including the challenges it faces in the 21st century because of human behaviour, I say fair enough to showing crabs running the gauntlet of moray eel attacks to music which would be more common on the Horror Channel.

Even the making of it was compelling TV: jet skiing across fearsome waves to create footage of surfing dolphins; missing the one night of spawning and having to wait a full year to try again; the overhead image of many thousand turtles on a beach to lay their eggs; deep-sea footage of a toxic saline lake; chasing a hunt which creates what fishermen have called the boiling sea - these have all provided enduring images which make one grateful for the BBC. To have an institution which has the budget, expertise and public service brief to commission such series should be a source of national pride. If you think this might be grandiose, consider that 80 million people from China alone watched per episode.

I found the whole series deeply humbling as it made me reflect on human life in comparison with the creatures with whom we share the planet. Abraham Maslow was a psychologist working in the 1940s and 1950s who came up with an influential theory of human motivation. He talked of a hierarchy of needs and it is usually shown as a pyramid. In order from the bottom, these consisted of: Physiological; Safety; Love; Esteem; Self-actualisation.

·       Physiological - these are the basic needs for survival, including breath, food, water, warmth, rest;

·       Safety - this is the area of personal and community security;

·       Love (or belonging) - these are family relationships and friendships, whether social and intimate;

·       Esteem - these are feelings of accomplishment and self-worth;

·       Self-actualisation - this is the top level which talks of fulfilling one's potential, including the exploration of creative activity.

Maslow amended his initial thesis to add another category on the top called self-transcendence, concerned with truth and spirit. Do follow the idea up if you are interested.

I was struck by how in our community we take much of this pyramid for granted. At Norwich School, we talk a good deal about pupils fulfilling their rich potential, of exploiting creativity and it is good to be reminded that such activities are only possible because our basic needs are being consistently and completely met. I don't want to overplay the comparison of human motivation with a natural history programme, but it is clear that much of Blue Planet II centres on the physiological and safety needs of its creatures and we know there are significant parts of the world where human beings do not have the luxury to focus on much more.

Love and esteem are complex for us; after all, we are a community with nearly 1000 teenagers, where relationships with family, peers and teachers are constantly shifting as you go through a period of rapid physiological change and psychological development. Yet it was heart-warming to see bonds of intimacy created in play by dolphins and whales, and it is precisely the similarity of relationship issues for humans in less affluent parts of the world which provides their power when compared to people in our situation.

Yet where does this take us? It certainly runs the risk of throwing people of your generation back to the age-old retort of teenagers against parents: "Well, I didn't ask to be born/be your child/live in Norwich, etc". I hope that series like Blue Planet II remind us of our connectedness with the planet we share and the good fortune of our situation. Our advantages in being human, in being in an affluent country, in having loving and supportive families, in having personal qualities of note, in being at a good school, and so it goes on. Being aware of such advantage reminds us not to feel that we are entitled to it and encourages us to use it to help the wider community.

I am reminded of the motto at Sandhurst, which Major David Stead told us of when he came to address us on Remembrance Day: the motto was Serve to Lead, an adaptation of a phrase from our aims that you know well. According to Maslow's Hierarchy of Needs, all at Norwich School are fortunate in their situation, so my challenge is what will you do with that as your personal theory of motivation. I hope you will have a think over the holiday about how you can serve those around you, whether in the family or in the wider community. It is through such an attitude that you will pick up the skills and approach to be the leaders of society we hope you will be, whatever you choose to do.

I wish you all a restful and enjoyable Christmas break."