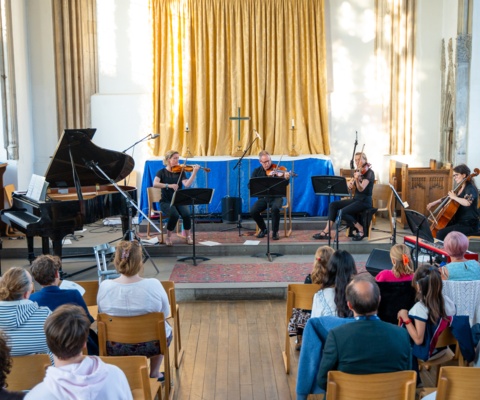 This year’s Drake Music Composition Competition Prize entries were performed by a professional group of musicians in the annual New Sounds Concert Showcase as part of Gather22. The pupil compositions are a response to the terrible humanitarian crisis playing out in Ukraine with the following themes: war, hope for the future and refugees. This year's winner was Eleanor McGuire (M5). She shared with us her experience of entering and winning the competition:

"It felt very unexpected to win the Drake Prize since I hadn’t had much experience with composition outside of the classroom, but it was good to be competing against pupils of different ages. I had no idea that people would enjoy my piece so much as I was more focused at the time on creating something with harmonies that weren’t dissonant.

In my piece - simply titled ‘For Ukraine’- I decided to create a soundtrack for the situation in Ukraine. I wanted to picture the physical fighting during the first, faster part of the piece, and then when it slows down I wanted to evoke the feelings of the people who are suffering due to this crisis. I wanted to created something that would reflect the double-sided nature of war: both the person who inflicts damage and the person who suffers because of it.

In Lower 4 I had briefly considered entering the Drake Competition but decided against it in the end as I didn’t feel confident or ready enough. However, since starting the GCSE Music course at the start of this year I now have a better idea of composition and creating my own pieces.

I started composing the piece during the Easter holidays when the competition was first announced, but after being busy doing an orchestral residential for 4 or 5 days I somewhat forgot to continue. However, I soon resumed composing as I really wanted to finally finish an entire piece without stopping halfway through.

Next year I am going to do both pieces of my GCSE Music composition coursework and complete them in time for my actual GCSEs."