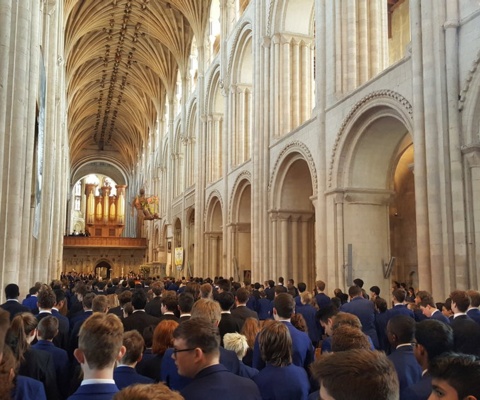 Dr Anthony Speca spoke in our Friday Cathedral Assembly on April 20th 2018. The reading at the beginning of the service was John 20.24-29. But Thomas (who was called the Twin), one of the twelve, was not with them when Jesus came. So the other disciples told him, 'We have seen the Lord.' But he said to them, 'Unless I see the mark of the nails in his hands, and put my finger in the mark of the nails and my hand in his side, I will not believe. '

A week later his disciples were again in the house, and Thomas was with them. Although the doors were shut, Jesus came and stood among them and said, 'Peace be with you. ' Then he said to Thomas, 'Put your finger here and see my hands. Reach out your hand and put it in my side. Do not doubt but believe.' Thomas answered him, 'My Lord and my God!' Jesus said to him, 'Have you believed because you have seen me? Blessed are those who have not seen and yet have come to believe. ' I have the good fortune to be an uncle by marriage to three girls. Some years ago, during my middle niece's baptism service, my older niece was treated to a very long, but very exuberant sermon by a priest clearly caught up in the spirit of the Easter season in which we currently find ourselves. Christ died for us! He was laid in the tomb! Christ is risen! He is not here! Alleluia, alleluia!

My older niece was only five years of age then. Turning to her aunt, my wife, she asked with sorne exasperation, 'Aunty, is Jesus dead or alive?' My wife blinked a moment, and then responded with care. 'Ask your grandmother.'

Some years later, when that middle niece was herself about five years of age, she was treated to a blockbuster performance of Jesus Christ Superstar right here at Norwich School. Bedazzled by the amazing singing, staging and costumes, she turned to her aunt, my wife.
'Aunty,' she asked, 'is Jesus dead or alive?' My wife blinked a moment, and then responded with care. 'Ask your uncle.'

And when my niece, little five-year-old Poppy Clarke, asked me her question later that evening, I dutifully replied, 'He's alive'. She was thrilled. 'That means Judas is alive, too!'

Have you heard the saying 'from the mouths of babes'? Yes, Poppy-that means Judas is alive, too.

That's the mystery of Easter. Christ has died. Christ is risen. Christ has conquered death. Christ has transformed the Cross from an instrument of torture and execution into the gateway to eternal life for each and every one of us. Including Judas.

Now, I know what you're thinking. You're furrowing your brow at this point and asking just how Jesus did this exactly, whilst hanging on a cross no less!

That's precisely where the mystery lies. Christians have argued for two thousand years about the meaning of that mystery, and they probably will do for two thousand more. But don't hold your breath waiting for a purely rational explanation. Faith wouldn't be faith if it were science.

People today, though, don't have much time for mystery. Like the doubting apostle Thomas from our reading, they prefer science over faith. Rationality and logic over story and symbolism. How could God be Man? Or Man, God? How could Jesus be God and have died? How could God have died and then risen? Isn't God immortal anyway-you know, deathless? How can anything, even God, be two opposite things at the same time-let alone three if you throw in the dove?

It's enough to make you want to throw up your hands, and shake your head, and turn away from such mind-bending hocus-pocus to something more solid, more logical, more scientific. 'Unless I put my finger in the mark of the nails,' said Thomas, 'I will not believe.'

I agree with you. I very much do-in fact, doubting Thomas is my favourite apostle, since I feel a lot like him. But over the course of my life, I've also come to think that, ultimately, less of what we think is solid and logical really is solid and logical-even if it is scientific.

For example, I don't know if you noticed that there are some very special pupils here at Norwich School who have the power to appear in two places at the same time. You've probably already seen them-maybe in the New Buildings-though you probably didn't know that someone else-maybe in the Palace-also saw them at the very same moment you did!

No? Then please let me introduce Sophia and Chester! [Identical twins Sophia and Lauren Carter, and Chester and Hugo Dimoglu, walk into the centre of the nave from opposing aisles.] Sophia and Chester also go by the names Lauren and Hugo-though I think they just enjoy confusing people. You saw it here first, folks-the same person in two places at the same time! Thank you, you two! [A// four depart.] Okay-I admit that's a pretty silly party-trick. But the scientific truth is that, especially at the tiniest physical levels, some one thing can indeed be in two places at the same time. It's called quantum superposition. Just ask your friendly neighbourhood scientist.

But how does that make any sense? How can a tuning fork, or anything else, be two opposite things at the same time?

That's the mystery of quantum physics. Scientists have been arguing for many years over the meaning of that mystery, and they probably will do for many years to come. But don't hold your breath waiting for any purely rational explanation. To say that something is and is not the same thing at the same time defies all the principles of logic. But it is a matter of fact. It's just the way things are.

Now, I'm not saying that, because the physical world is illogical at the tiniest levels, anything could be true, however illogical. That Sophia and Chester could really be in two places at the same time. That God could be a human being; or a human being, God; or God dead but also alive. And I'm not saying that because quantum physics is true, the Easter mystery is true.

That would be a pretty silly party-trick of an argument. The Easter mystery simply doesn't follow from some microscopic tuning fork vibrating and not vibrating at the same time.

But what I am saying is that it's also a silly argument just to throw up your hands, shake your head and say 'This makes no sense-it's irrational, it's illogical, it's unscientific, it's nonsense.'

And I think I speak for us teachers here when I say that, if there's one lesson we'd like you to take away from Norwich School, it's that the truth is often much more complicated and difficult to understand than you think it is-and that there's often more than one way to get at the truth. It's always a bad argument just to throw up your hands, shake your head, and say, 'That's rubbish'.

Little five-year-old Poppy Clarke kept an open mind. My Easter lesson for you today is that you should keep yours open, too.